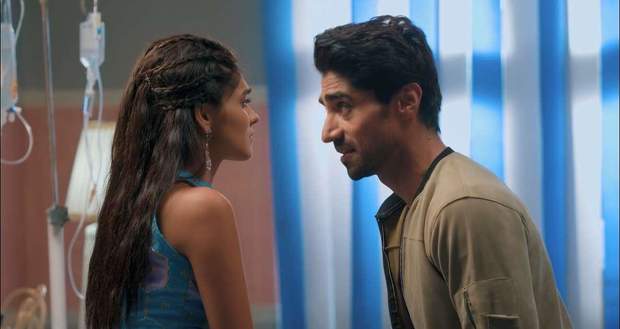 As Abhimanyu comes out of the operation theatre Harshvardhan comes and asks him to come to the boardroom.

Harshvardhan scolds Abhimanyu for opening a wing without discussing it with the other members.

Abhimanyu defends Akshara and tells them that he trusts her implicitly.

Anand and Harshvadhan are upset at Abhimanyu for only thinking of Akshara and not giving any importance to the chain of commands or work culture that is the essence of their family.

Akshara spots Anand, Harshvardhan and Mahima coming out of the board room and goes to find Abhimanyu but he is not there.

At the Goenka house, Aarohi is thinking of Abhimanyu's reaction and is about to go to her room when Abhimanyu calls her from behind.

Abhimanyu is standing with the police at the door and tells her that now he knows everything, and asks the inspector to arrest her, while Aarohi begs him to forgive her and begins to shout.

However, she was just having an illusion.

On the other hand, Aarohi is angry at Akshara for telling Abhimanyu while Akshara is worried about Abhhimanyu and what he must be feeling.

Abhimanyu gets a call from Manjari asking her to come home urgently.

After a while, Akshara gets a call from Abhimanyu and who is telling her that Manjari knows about their secret and is very upset with them.

Later, Abhimanyu tells Akshara that what is done is done and they shall not talk about it anymore.

In the meantime, Manjari scolds Abhimanyu for not listening about letting go of the detective.

Abhimanyu tells Akshara that they will only concentrate on getting married.

However, Mahima is thankful that Abhi is still ignorant about Aksara’s truth and she decides to tell it at the right moment.

Akshara is under the impression that Abhimanyu knows the truth and is happy to hear about moving on but she sees something that wipes her smile.