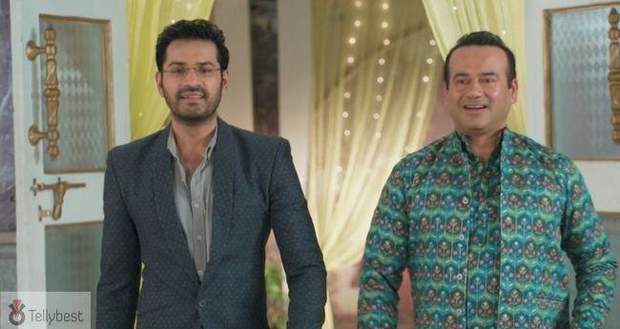 Just then, Manjari comes in and tells Abhimanyu that Anisha is having cold feet.

Abhimanyu assures Anisha that Kairav is a very good person and will always keep her happy.

Meanwhile, Akshara wipes Kairav’s tears while Kairav tells him that he will have to do something about this matter and that Anisha has to tell everyone of her doing.

Akshara requests Kairav to not say anything now because Abhimanyu cannot take any stress before surgery.

Later, Akshara follows Kairav inside worrying about Abhimanyu’s reaction to the truth.

Inside the house, Mahima and Suhasini are discussing wedding dresses when Kairav leaves the house on the pretext of some issue at the factory.

Anisha comes to talk to Kairav but he stops her and tells her that she will have to tell the truth to everyone herself and that there will be no more wedding rituals to be done going forward.

Akshara also tells Anisha to tell the truth to everyone and not drag things out and spoil other people’s relationships.

Meanwhile, Mahima is telling Shefali that something has happened between Kairav and Anisha which is way bigger than a lovers' quarrel.

Meanwhile, Dr Kunal gets a suicide voice note from his sister and hurries back home.

At the same time, Abhimanyu is discussing Anisha’s marriage when they come across a child who is unwell.

As Abhimanyu tries to help, his hands fail him until Akshara offers assistance and the child is given first aid.

Afterwards, Abhimanyu panics about his hand getting back to full strength and tells Akshara that it is important for him to be back to normal as being a doctor is his identity and without that he is incomplete.

He also tells Akshara to always be with him and never leave him alone as she is his strength and he needs her.

Abhimanyu also takes promise from Akshara to go for her audition if her audition falls on the same day as his surgery.

At home, Anand is talking to Dr Kunal who is informing him of his urgent departure and promises to return soon to perform Abhimanyu’s surgery.

However, Abhimanyu gets worried but keeps a brave face telling everyone to get going as there is so much to do for the wedding.

Meanwhile, Akshara gets Kairav’s message asking her to remind Anisha about telling her family.

Akshara gets worried as she is sandwiched between Abhimanyu’s surgery and Kairav’s happiness.