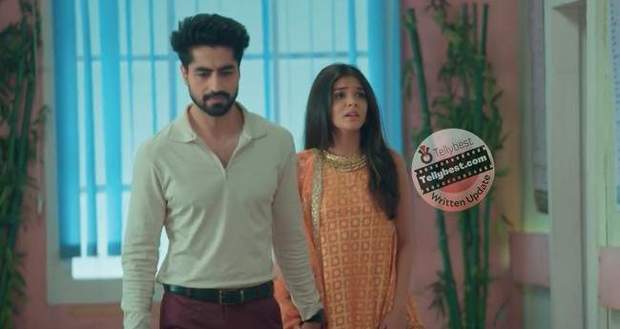 Today's Yeh Rishta Kya Kehlata Hai (YRKKH) 12th December 2022 episode starts with Abhimanyu and Neil promising Manjari that they will be together forever.

After they both leaves, Harshvardhan congratulates Manjari for becoming a grandmother while Manjari also laughs with joy.

In her room, Aarohi is venting her anger on Akshara to Deepti and asks her what she will do about her fake pregnancy.

In the meantime, Shefali overhears some parts of the conversation, when she comes to give paternity books to Aarohi, and wonders what Aarohi is hiding.

Meanwhile, Abhimanyu stops Akshara from putting her foot on the pen and tells her to be extra careful now.

He also apologises to Akshara for not giving the proper reaction when she told him the news yesterday.

However, Akshara tells him to not bother as it is their lucky charm to do things the second time around.

Meanwhile, Akshara gets a call from the music director about whether she wants to do the song or not while Abhimanyu tells her to put health as a priority.

On the other hand, Swarna and Suhasini are preparing Laddoos and talking about Akshara and  Aarohi.

Later, Akshara is happy to get through the week without any mishaps.

Meanwhile, Abhimanyu comes there with her recording set-up so that she can record songs at home.

Akshara becomes excited and jumps a little which makes Abhimanyu check her and tell her that she will have to be cautious about everything.

Later, Manjari is serving a sweet dish to Akshara when Abhimanyu comes there and checks the sweetness.

Just then, Abhimanyu tells Anand that he will be needing six months' leaves three months before and after birth as he is also going to be a parent and will love to spend time with Akshara and the babies which Manjari praises wholeheartedly.

Abhimanyu and Akshara are doing exercises when Akshara gets some notifications about Pani Puri when Abhimanyu puts her phone down and tells her to focus.

Abhimanyu is looking after Akshara like a porcelain doll and is keeping strict eyes on her so that she does not put a single foot wrong.

Later, Akshara is listening to music in the bathroom while Abhimanyu is getting worried about her.

He is about to break the door when Akshara opens the door realising that Abhimanyu has been calling her for a long time.

Later, Akshara is irritated at Abhimanyu’s micromanaging while Swarna and Suhasini are laughing their hearts out loud.

On being asked, Swarna tells them about Akshara telling them about taking too much care.

After a while, Manish thinks to invite both the girls to live with them for a few days so that they can spend some time together and Akshara will also get a break from Abhimanyu's military rule.

The next day, Manjari tells Akshara and Aarohi about Swarna’s invitation about coming to live with them.

Abhimanyu does not want Akshara to go but gives in seeing her mood.

In the meantime, Akshara has gone to the Goenka's house to rest and asks them to get her tastiest food and gives instructions to them.

Elsewhere Abhimanyu is worrying about Akshara at home.

© Copyright tellybest.com, 2022, 2023. All Rights Reserved. Unauthorized use and/or duplication of any material from tellybest.com without written permission is strictly prohibited.
Cached Saved on: Thursday 26th of January 2023 05:09:42 AMCached Disp on: Sunday 5th of February 2023 03:46:43 AM