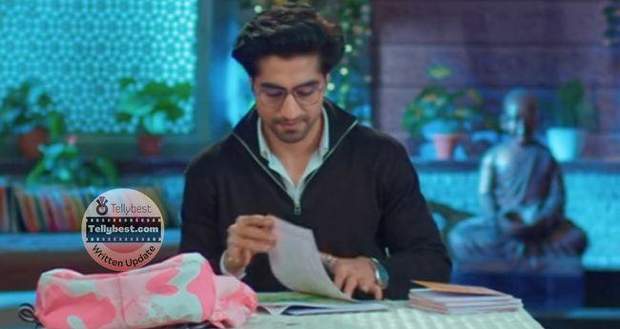 Rohan complains to Abhimanyu for irritating him the whole way with his Cat and Bat and tells him to learn to vibe with him at least.

Abhimanyu reminds him of him being his teacher and has started enjoying the song when they come across a roadblock.

On further investigation, it was found that the road will be blocked for a long time due to landslides.

Dr Rohan tells Abhimanyu that they can take shelter in Kasauli which is a few km away.

Meanwhile, Akshara is still in shock at seeing Abhimanyu’s name on the list.

Just then Abhinav comes to her and begins to fake knock to get her attention.

Akshara asks him to leave her alone but he continues to knock making Akshara reply.

Seeing Akshara’s not laughing at his knock-knock joke he tells her that he understands that something really big has happened to make her react so intensely.

Akshara tells him that she has refused to go to the market because her past will come in front of her which she does not want as she only wants to live in the present.

Abhinav observes Akshara’s silence about not wanting to tell the name on the list and distracts her by telling her that she should not worry and he will sell all her jam to the tourist in no time.

He also tells her that Abheer will also get over it with a bribe of momos.

Akshara tells him to not sing a song after bringing momos which makes Abhinav crackle with laughter.

Later, Akshara asks him what he wants to say earlier which was interrupted due to the call.

Abhinav gets confused at the mention of his talk and is literally saved by the phone bell.

On the other side, Abhimanyu is calling him to ask him to pick him up as he is stuck due to a roadblock and his companion also had to leave due to a family emergency.

However, Abhinav apologises to him as he has to go to his son’s fancy dress competition and will not be able to pick him up.

Abhimanyu understands a father's duty to their children and tells them to have a good time.

Abhinav feels bad for not being able to help Abhimanyu and asks Aksara to pray for him to reach his destination safely.

Just then Akshara receives a message in the school group and shows it to Abhinav.

Abhimanyu is talking to Ruhi who is sympathising with him for being left alone and tells him to not take his “mulfer’ off.

Abhimanyu smiles at Ruhi’s mispronunciation and tells her that it is a muffler.

Just then he gets a call from an unknown number but rejects it.

Meanwhile, Ruhi tells her that she will pray to RK and send help to him immediately.

In the meantime, Abhinav arrives at the Sultan Dhaba looking for Abhimanyu who is rejecting his call.

Later, Abhinav reaches Abhimanyu while Ruhi is instructing him to come back before he makes another friend and that he is only her and her Poppy.

Abhinav tells Abhimanyu about the school message that is asking for Annual fees and exam fees to be submitted at the same time.

Telling Abhimanyu the needs and challenges of a middle-class man whose child studies in a good school, he assures him that he will not charge him extra for the whole Himachal knows that Abhinav has too many needs but does not have any greed.

Meanwhile, Ruhi is playing doctor-doctor when Mahima scolds her for using her stethoscope.

She blames Abhimanyu for giving her too much freedom and tells her when he will take her down a notch then she will understand it.

Ruhi feels offended and tells Mahima that her Poppy loves her only and will always love her.

Mahima bitterly tells her that nothing remains forever.

Ruhi feels hurt and throws Mahima’s stethoscope into the pond and leaves calling for Manjari.

Mahima tells her that Ruhi needs to understand her place in Abhimanyu’s life and know the truth.

However, Manjari tells her that there is no need to take Ruhi’s happiness from her.

Mahima tells her that Abhimanyu’s happiness is not in being Poppy to Ruhi and nor has he forgotten his past.

Manjari realises the truth in Mahima’s words and knows that Abhimanyu has taken more responsibility for himself than he should.

Abeer Decides To Be A Doctor

Meanwhile, Akshara is preparing Abheer for his fancy dress competition while telling him he should have opted to become Kohli and then all they would need to do is make a beard and show aggression on the stage.

Later, Akshara is fixing Abheer’s dress, when Abheer restlessly pinches the needle in her finger.

Later, he decides to become a doctor in the fancy dress competition as his astronaut suit is very itchy.

Meanwhile, Abhinav is taking Abhimanyu to his car where Abhimanyu sees Abheer’s photo while Abhinav brags about him and tells Abhimanyu that Abheer is not just his son but his life.

© Copyright tellybest.com, 2022, 2023. All Rights Reserved. Unauthorized use and/or duplication of any material from tellybest.com without written permission is strictly prohibited.
Cached Saved on: Wednesday 25th of January 2023 09:32:43 AMCached Disp on: Sunday 5th of February 2023 03:33:31 AM