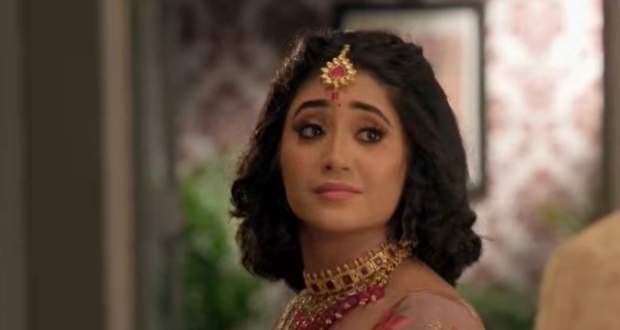 Today's Yeh Rishta Kya Kehlata Hai (YRKKH) 12 July 2021 episode starts with Ranvir and Sirat walking back as he asks her if she would remarry if he dies.

She gets emotional and he cheers her up while noticing the audio file in his phone.

The next morning, the sponsor informs Kartik, Sirat, and Ranvir that he wants them to handle the event in the evening and they all agree.

Sirat gets hesitant to join hands with them and leaves while Ranvir gets a little love advice from Kartik.

Kairav gets a nightmare and Sirat consoles him.

He gets shattered hearing Sirat saying that she has fallen in love with Kartik.

Ranvir sees Kartik and Sirat coming downstairs and leaves in his car while others search for him.

Sirat keeps calling him but he doesn't answer his calls while driving.

Ranvir recalls his moments with Sirat while remembering Chauhan's taunts as he recklessly drives.

Chauhan calls one of his aids and tells him to get Sirat framed anyhow and separate her from his son Ranvir.

However, he gets shocked seeing Ranvir while Saroj calls Sirat and informs her that Ranvir is home.