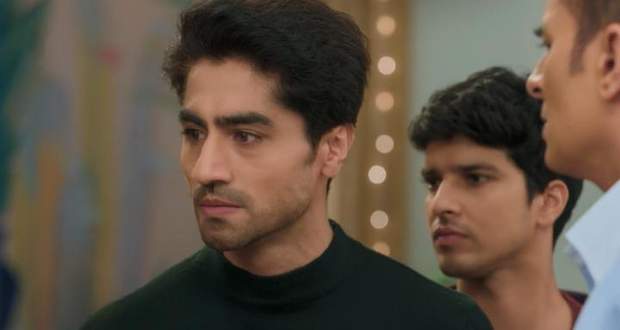 Manjari comes to him and together they vent their hearts and share each other’s pain.

Abhimanyu tells her that it is over now everything will be alright.

After a while, Akshara tells her that she needs to be strong for her family and will have to take care of them.

The next morning, Akshara and Manjari doing Aarti while Abhimanyu also joins them while wondering about the injury.

On the other hand, Akhilesh and Manish tell Aarohi about a proposal from a top-notch surgeon who is based in London.

Aarohi refuses them until Vansh compares them with Abhimanyu and thinks about finding someone better than Abhimanyu.

At the breakfast table, Abhimanyu apologises to everyone for making Harshvardhan leave while Anand takes Harshvardhan’s side and tells them that it wasn’t good that he left.

Abhimanyu continues to feel discomfort in his hand.

After discussing their itinerary Anand tells Abhimanyu that they will be retaining four interns as permanent doctors and tells them Aarohi is one of them.

Abhimanyu does not object and that Aarohi is a good candidate and his personal differences shouldn’t come between her career.

Akshara goes to inform Aarohi while Abhimanyu books an MRI for himself.

Meanwhile, Aarohi announces her promotion to the Goenkas and resolves to get better than Akshara and Abhimanyu in both personal and professional life.

At the hospital, Abhimanyu is preparing for MRI while Akshara searches for him.

Dr Rohan goes out to attach a crown and finds Akshara who asks for Abhimanyu.

Dr Rohan lies to Akshara about Abhimanyu being in consultation and takes Abhimanyu’s medicine from her.

On the other hand, Aarohi arrogantly receives congratulations from her colleagues and boasts about her skills.

Aarohi is acting overconfident and administers the wrong injection to a child.

Afterwards, Akshara congratulates Aarohi in person and tells her that Abhimanyu has praised her.

Aarohi is not impressed at Abhimanyu’s praise and says that she deserves to be praised as she is the best.

Abhimanyu takes out his rings from the pocket and wears them however, his engagement ring is missing and he wonders where he had dropped it.

© Copyright tellybest.com, 2022, 2023. All Rights Reserved. Unauthorized use and/or duplication of any material from tellybest.com without written permission is strictly prohibited.
Cached Saved on: Wednesday 25th of January 2023 12:44:21 PMCached Disp on: Thursday 9th of February 2023 09:08:56 AM