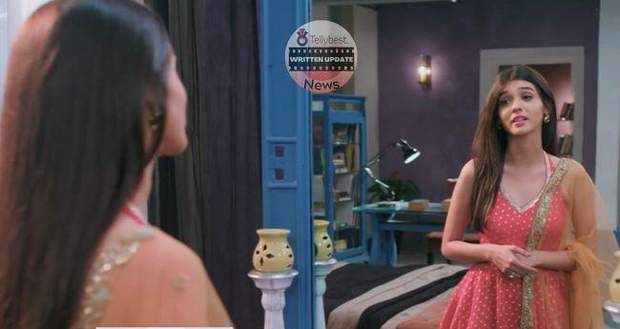 Abhimanyu looks surprised to see Akshara in a playful mood.

Taking the opportunity, Abhimanyu gets romantic and tells Akshara if she continue to act romantic then it will be difficult for him to go.

Later, Abhimanyu asks Akshara if she has any plans for the evening while Akshara is about to mention her plans and then makes stupid excuses to prove that she is extremely busy.

Kissing Akshara goodbye, Abhimanyu smiles to himself knowing Akshara has planned a special birthday surprise for him.

Meanwhile, Neil collides with Aarohi on the road.

Aarohi insists Neil to listen to her and threatens to get into a road accident by standing in the middle of the road.

In the meantime, Abhimanyu sees Dr Rohan packing a gift and assumes it for him. He asks Rohan what has Akshara plans for him.

However, he is disappointed to see the gift for someone else and wonders what Akshara has planned for him.

Meanwhile, Neil tells her to stop dramatising the situation.

Aarohi tells him to listen to her for once and then she will leave him alone and will go away.

Getting permission from Neil to speak Aarohi tells Neil that the papers that she has prepared were for them both.

Using Neil's position and background as a weapon, she tells Neil that just like him, he feels a second-class citizen in her house just like her mother.

She tells him that in his house also, Abhimanyu is first and important to everyone and she can relate to it.

She tells him that she was trying to secure his future so that he does not have to bear the injustice.

Using tears as a second weapon, she tells Neil that she is leaving the city tomorrow and wants him to know that his love was not wrong only the circumstances bring him apart.

Pretending to walk in distress, Aarohi risks her life while crossing the road.

However, Neil saves her at the last minute.

In the meantime, Abhimanyu is running out of the hospital to meet Akshara when a biker irritates him and forced him out of the car.

Abhimanyu questions his identity and is stunned to see Akshara garbed in a biker’s dress.

Meanwhile, Manjari tells everyone at home to not bother Akshara and Abhimanyu in celebrating Abhimanyu's birthday.

Later, Akshara brings Abhimanyu to a deserted place and tells him to change.

As Abhimanyu and Akshara move towards romance, Abhimanyu gets code red from the hospital.

Seeing so many children being in pain and struggling with their life makes them worried.

Mahima calls Aarohi informing her about the emergency and tells her to play the situation in her favour.

In the meantime, Abhimanyu tells Ashara to go home and goes about his duty while Akshara resolves to stay by his side.

Meanwhile, Harshvardhan and Anand are worried about Abhimanyu’s reputation as an MD.

Later, Akshara calls Manjari to update her and requests her to prepare for Abhimanyu’s surprise.

After a while, Abhimanyu is trying to revive a child and becomes sad when she could not make it.

© Copyright tellybest.com, 2022, 2023. All Rights Reserved. Unauthorized use and/or duplication of any material from tellybest.com without written permission is strictly prohibited.
Cached Saved on: Monday 21st of November 2022 01:56:28 AMCached Disp on: Tuesday 29th of November 2022 12:04:48 AM