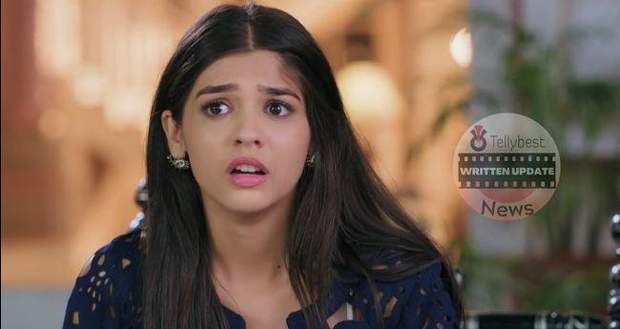 Abhimanyu holds Akshara in her arms while saving her from falling.

He asks her to come and live in the house for two-three days until Manjari’s condition improves.

However, Akshara tells Abhimanyu that she does not want to impose on him and will come to give her music therapy sessions.

Abhimanyu tells Akshara that he is being selfish for her mother and cannot afford to let Manjari worry about their relationship.

He tells her that she should also come for Manjari’s sake or she can think of this as a music therapy project.

After a while, Abhimanyu and Neil settle Manjari in her room.

Manjari looks around and asks for Akshara when she could not find her.

Abhimanyu makes an excuse and leaves wondering about Akshara’s decision.

Meanwhile, Akshara discusses her conflict with Suhasini about going to live at Birla's house until Manjari’s recovery.

Suhasini tells Akshara that she understands her decision is not easy as on one side Manjari’s health is in question and on the other hand her self-respect is on the line.

Seeing Akshara struggle with her decision, Suhasini tells her to go to Birla's house and prioritise Manjari’s health over everything as her heart wants to make this decision.

She also tells Akshara that Manish will not like her decision but she needs to focus on what is important to her.

Just then, Manish comes there and Suhasini lies to him about Akshara wanting to go to get some music lessons for a few days.

Meanwhile, Mahima is not happy about bringing Akshara back to the house for Manjari’s sake and decides to tell Manjari everything while she was in a Coma.

At the Birla house, Abhimanyu is waiting eagerly for Akshara to choose Manjari's health.

Just then he sees Akshara arrive in her car looking sad.

As Akshara moves towards the entrance, all her past memories come rushing to her mind but she soldiers on.

However, her foot twists at the door.

Abhimanyu who is silently watching Akshara from afar comes to help her and carries her in his arms recreating their Grah Pravesh.

Neil gets the first aid box but Akshara tells Abhimanyu that she will take care of herself and asks Neil to get her some Jamun leaves.

Abhimanyu stops himself from calling her Gharelu doctor while Akshara gets up to go to Manjari.

In Manjari’s room, Akshara presents her with a teddy bear and pretends that everything is fine between her and Abhimanyu.

Meanwhile, Mahima wants to tell Manjari everything but Harshvardhan stops her.

Later, Manjari tells Akshara and Abhimanyu that they will have to perform the Dusshera Veneration together.

© Copyright tellybest.com, 2022, 2023. All Rights Reserved. Unauthorized use and/or duplication of any material from tellybest.com without written permission is strictly prohibited.
Cached Saved on: Monday 21st of November 2022 05:02:45 PMCached Disp on: Monday 5th of December 2022 01:20:17 AM