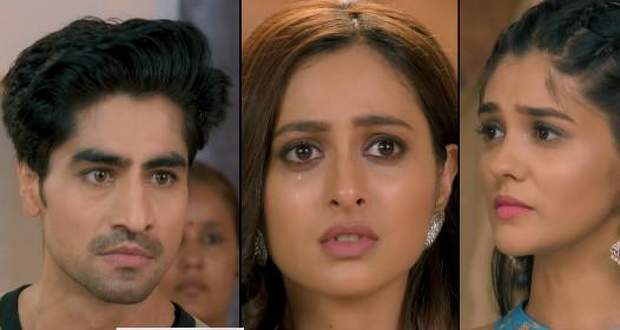 Today's Yeh Rishta Kya Kehlata Hai (YRKKH) 13th April 2022 episode starts with Akshara telling Aarohi that Abhimanyu has forgiven them. She also warns Aarohi to be careful in future or she will never forgive her.

Seeing Harshvardhan in a mad mood, Manjari asks him if something is bothering him.

Harshvardhan is angry at Abhimanyu for opening a wing for Akshara and vents his anger on Manjari.

Manjari feels hurt but tries to convince Harshvardhan but he keeps being angry.

Just then Abhimanyu comes in and argues with Harshvardhan for disrespecting Manjari.

Later, Abhimanyu gets a message from the investigator saying he will get definitely get evidence by evening.

In the meantime, Goenkas and Birlas are preparing to compete in the Sangeet ceremony.

Abhimanyu is calling Akshara but no one is letting Akshara pick up the call so that she doesn't tell anything to Abhimanyu.

Neil gets the video call from Reem which Abhimanyu uses as an opportunity to talk to Akshara.

Abhimanyu and Akshara are caught talking and are playfully scolded for leaking the dance songs.

Akshara is thankful to Abhimanyu for letting go of the matter of the accident because of Manjari.

She promises herself that she will always love and care for him in future.

However, Aarohi finds it difficult that Abhimanyu has forgiven them so easily and remains suspicious of Abhimanyu.

On the other hand, Mahima is writing a letter to the detective explaining the scenario and is assured that Private Investigator will convey the message to Abhimanyu.

Meanwhile, at the Goenka’s house, Akshara is shouting with glee as her favourite singer Kumar Shanu is coming to Udaipur that night.

Reem is still connected to Neil’s phone while Goenkas discusses their disappointment at not being able to meet Kumar Shanu tonight.