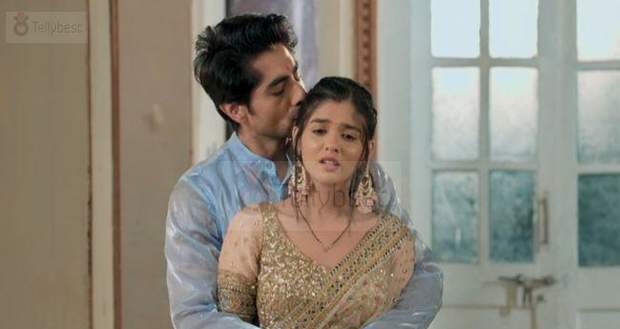 Meanwhile, Swarna tells Suhasini about Abhimanyu’s surgery has been postponed and Mahima is requesting to perform the Mehndi ceremony the next day.

Suhasini is not ready but Manish convinces her while Kairav looks agitated.

Meanwhile, Akshara assures Abhimanyu that she will always stand beside him.

Later, Akshara comes to Anisha to ask her when is she planning to tell the truth to the family while Anisha tells her that she is also trapped in a bad situation and needs time.

Akshara feels stressed and hearing of the wedding preparations increases her stress even more and she prays to God.

The next morning, Abhimanyu calls Dr Kunal asking him to come back soon as he is scared that the window of the surgery might close at any time.

He also tells him that he has a lot of work pending that he has to do especially support Akshara in her music.

Afterwards, Akshara wakes up to find out that she is late while Abhimanyu tells her that he let her sleep because she looked disturbed.

Meanwhile, Kairav is looking at the card that Anisha has sent when Vansh and Aarohi tease him making him lose his temper.

Kairav apologises for his outburst giving the excuse of the work problems at the factory.

On the way, Abhimanyu tells Akshara that today they will only focus on the celebration and not talk about his surgery or her music.

Meanwhile, Kairav comes down while everyone is welcoming Anisha and her family.

Shefali asks him about not being ready while Vansh teases him and leaves him to talk with Anisha.

Anisha requests Kairav to give her more time to tell her truth to them.

Just then Abhimanyu and Akshara arrive at the Goenka house.

Kairav questions Akshara about not convincing Anisha to tell the truth while she tells him that she had asked her many times but she said she needs time.

Later, Abhimanyu is about to put Mehndi on Kairav when he gets up and announces that he does not want to marry Anisha.