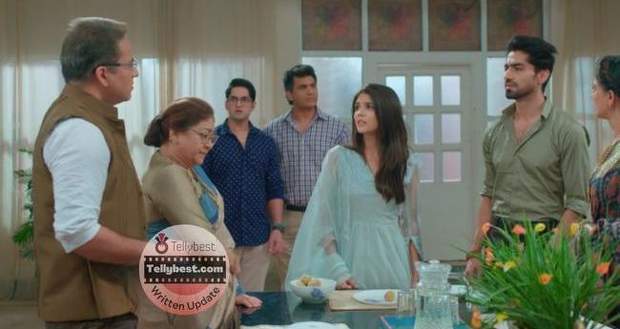 Meanwhile, Abhimanyu is worrying about Akshara following the routine while Dr Rahul tells him that his routine must have driven Akshara to her parent's house.

Akshara tells Kairav to lie to Abhimanyu that she is sleeping.

However, Abhimanyu catches her red-handed and scares Akshara that he has come to take her back.

Surprisingly, Abhimanyu tells her that instead of taking her back, he has come to stay with her.

In the meantime, Aarohi shows Neil a brochure for a weekend away from home and tells Neil that they will not get this opportunity again once the baby arrives.

Neil agrees with her and approves of her plan.

Later, Suhasini is making Akshara eat the laddoo when Abhimanyu comes there and scolds her for not following the chart and eating just anything.

Suhasini tells him that although medical science has progressed a lot but mothers have been eating these home remedies to give birth to a healthy child.

Abhimanyu tells her that he is not criticising her home remedy but only is only concerned about Akshara whose pregnancy is not normal.

Just then Manish comes there and questions Abhimanyu for doubting their love for Akshara or thinking that they are not capable of taking care of her.

Abhimanyu feels trapped and tells him that he is not saying any such thing.

Later, Akshara tries to explain Abhimanyu’s concern to Manish and also tells Abhimanyu that her mental health is equally important to her.

Realising his mistake Abhimanyu apologises to Suhasini and goes to apologise to Manish.

Hugging him tightly he tells Manish that he is becoming a father for the first time and that is why he made a mistake.

Manish explains to him that there is a difference between loving and over concerned and tells him to keep Akshara’s happiness above all that.

Later, Abhimanyu is taking Akshara home when Akshara talks about going on a picnic with family but drops the idea as it will not be possible for her to go on an outing.

Later, Aarohi surprises Neil with a romantic night so that she can get pregnant however, Abhimanyu’s call spoils her plan and Neil goes away.

Neil looks inquisitive while Abhimanyu tells him that he has made some plan and want to discuss them with him.

The next morning Akshara wakes up to an empty bed, gifts and a letter.

All the members receive similar letters and gifts including the Goenkas and are surprised as well as excited to see the letter and smile at Abhimanyu.

Later, Mahima comes to Abhimanyu to scold him for not taking their responsibilities into consideration.

However, Abhimanyu and Anand convince her to come as well.

Later, Aarohi is cribbing about not getting an opportunity to be alone with Neil when Akshara comes to give her medicine for nausea which Aarohi misinterpret as motion sickness forgetting that she is supposed to be pregnant.