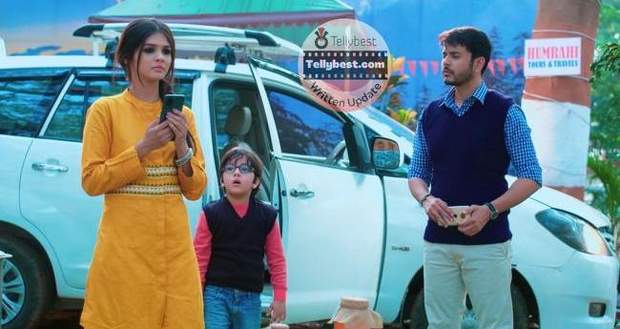 In the meantime, Abhinav has to get down to get the ticket when Abheer calls him but Abhimanyu hears him on the car speaker and feels his heart skip a beat.

Later, Abheer tells Abhinav that he is planning to be a doctor and he will have to get him an injection.

Abhinav gets worried thinking about someone getting hurt while Abheer tells him to not do TMD (Too Much Drama).

Abhimanyu helps Abhinav disconnect his phone from the speaker just when Akshara comes on the call.

Abhinav is conflicted thinking about dropping Abhimanyu or getting an injection for Abheer and asks Akshara what should he do.

However, Akshara passes the responsibility to him for giving Abheer so much liberty.

Abhimanyu tells Abhinav to take care of his son's needs first and that he can take him to the hotel later.

Later, Akshara’s heartbeats slow seeing Abheer dressed as a surgeon and reminding him of Abhimanyu.

Meanwhile, Abhinav thanks Abhimanyu for letting him bring the injection first and invites him to attend the fancy dress competition.

Abhimanyu hands over the injection to Abhinav but Abhinav gets scared seeing the injection and babbles about being scared of doctors and injections.

He requests Abhimanyu to give the injection to Abheer as he can also teach him how to use it.

Abhinav tells Abhimanyu that he wants Abheer to become like Dr ABhimanyu Birla.

Later, Akshara is about to leave the green room when Abhinav comes there and shows her the injection that he holds like poisonous ivy.

Seeing Abheer, Abhinav gets emotional and tells him to definitely become a doctor.

Abheer tells him to not give her AEL (All Emotional Lectures).

Meanwhile, Abhimanyu is talking to Ruhi who is asking him for a diary-like Mahima.

Abhimanyu tells her to send the pic and he will order for her.

Just then the announcement for Abheer distracts Abhimanyu and he walks to see it.

Abhimanyu finishes his call with Ruhi while Akshara and Abhinav take Abheer backstage.

Abheer gracefully walks onto the stage and takes a bow and introduces himself.

Meanwhile, Abheer walks towards the auditorium and jokes about going to another doctor when he is ill as his fees are too much.

Abhimanyu once again gets distracted seeing Ruhi’s message and fails to see the performance.

Abhinav and Akshara are happy to see Abheer’s performance and cheer for him.

Later, Akshara tells Abhinav to thank his client for helping him.

As Abhimanyu thinks of taking a peek Abhinav comes out and tells him that he will take him to his hotel.

Abhinav thanks him profusely for letting him take the time while Abhimanyu tells him that he feels he is helping his own son.

In the meantime, Abheer asks Akshara if he has given his best performance or not while she tells him to wait for the results but he will always be best for her.

© Copyright tellybest.com, 2022, 2023. All Rights Reserved. Unauthorized use and/or duplication of any material from tellybest.com without written permission is strictly prohibited.
Cached Saved on: Wednesday 25th of January 2023 10:02:57 AMCached Disp on: Wednesday 1st of February 2023 09:58:07 PM