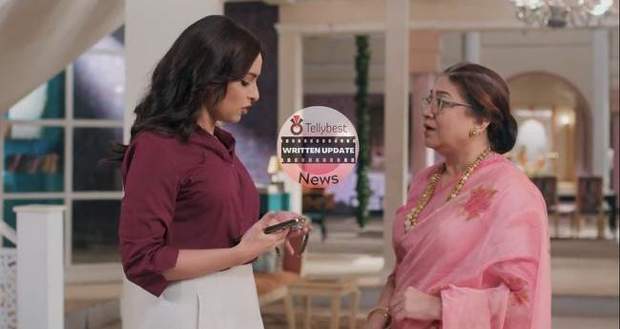 Meanwhile, Aarohi calls Neil asking him to meet with her but Neil refuses her telling her about the emergency.

However, Aarohi tells her that it is also a matter of her life and she is standing outside.

Later, Abhimanyu comes out looking depressed and shares with Akshara how he almost lost a young kid.

Akshara feels grateful and tells Abhimanyu that God is testing them on their special day.

After a while, a nurse informs Abhimanyu about not finding Neil anywhere while medicines and a child specialist are needed.

Unable to connect to Neil, Akshara tells Abhimanyu to sort the medicine and that she will take care of the child specialist.

At the same time, Abhimanyu and Akshara are walking towards the parking and see Neil standing out.

Abhimanyu scolds Abhimanyu for standing out at the time of emergency while Neil apologises for his negligence.

Akshara observes the Mangalsutra in Neil’s hand and asks about it.

Neil makes a story about it and tells her that he will submit it to the lost and found.

Later, Neil throws away the letter and Mangalsutra in the dustbin while Aarohi panics telling herself that she cannot let this opportunity go as this is her last chance.

Meanwhile, AbhiRa is resting in the car and Akshara sings a song for Abhimanyu to make him feel relaxed.

After a while, Akshara wonders what was Neil hiding.

The next morning, Abhimanyu and Ashara comes to check on the children and feels happy to see them all well.

Meanwhile, Swarna tells Manish that Akshara and Manjari have invited them for Abhimanyu’s birthday while Manish tells her that they will go.

In the meantime, Akshara asks Neil what is he hiding from them and that they will talk after Abhimanyu's birthday.

Meanwhile, Goeanka thinks that they should leave Aarohi's home so that nothing untoward happens on Abhimanyu's birthday.

However, Aarohi has plans of her own.

Meanwhile, Neil comes to Abhimanyu’s room to tell him about the children’s report and wish him a happy birthday and leaves to see Akshara come in.

Abhimanyu is in a happy mood and tells Akshara that he plans to chill all day in his room.

Seeing Abhimanyu, Akshara whistles at him while jumping on him.

Abhimanyu is impressed with his boldness and asks her if she has taken any medication to enhance romance.

Later, he holds Akshara closer and covers themselves under a blanket to celebrate his birthday and romance his wife.

On the other hand, Swarna comes to Aarohi’s room to find it scattered with clothes and jewellery gone.

Swarna alerts everyone while Kairav suspects that Aarohi has left home.

Meanwhile, Abhimanyu comes out of the bathroom drying himself with a towel while Akshara ogles him.

Taking the towel from Abhimanyu's hand, Akshara dries his well-honed body while Abhimanyu pulls her towards him to feel her closer.

Later, Akshara helps Abhimanyu to get ready for his party.

Although they are silent yet their eyes are doing the talking.

After having their fill of silent talks Abhimanyu is ready to go downstairs.

On the other hand, Goenkas are trying to trace Aarohi and are worried for her safety.

Later, Akshara and Abhimanyu come down to a dark hallway and Akshara disappears from his sight.

© Copyright tellybest.com, 2022, 2023. All Rights Reserved. Unauthorized use and/or duplication of any material from tellybest.com without written permission is strictly prohibited.
Cached Saved on: Monday 21st of November 2022 03:30:05 AMCached Disp on: Tuesday 29th of November 2022 10:40:57 AM