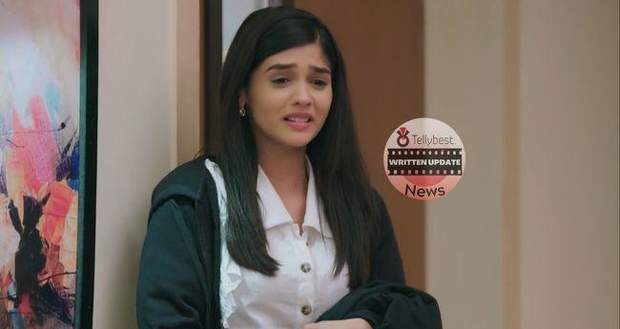 Today's Yeh Rishta Kya Kehlata Hai (YRKKH) 13th September 2022 episode starts with Mahima telling Abhimanyu that they are taking him back to Udaipur while Abhimanyu wants to remain there.

However, Manjari strictly orders Abhimanyu to go to Udaipur.

On the other hand, Dr Kunal tries to find out about Akshara's unknown caller.

Meanwhile, Akshara is released from the storeroom when a nurse opens the door and apologises for locking her.

Just then Dr Kunal comes to the store room while Akshara rushes to Abhimanyu’s room to meet him.

However, the room is empty and Dr Kunal tells her that Abhimanyu has gone to Udaipur.

Meanwhile, Akshara is repenting for leaving Abhimanyu for so long and decides to go to Udaipur to be with him.

As Akshara is about to leave, Dr Kunal stops her and tells her that her leaving will result in Kairav going to jail.

He also tells her that he knows her secret about hiding Kairav in Mauritius and understands what it's like to be protective of one’s sibling.

However, Maya calls him and tells him that the location of the finale has shifted to Udaipur and they will have to go there.

Akshara becomes happy to hear that God is with her and tells Dr Kunal that his stars are about to change.

After a while, Akshara overhears the nurses talking about Ganesh Chaturthi and becomes hopeful that her pains will be taken away and happiness will come back to her life.

The next day, Akshara is on her way to Udaipur while Abhimanyu is performing the veneration at the Ganesh Chaturthi and Manjari prays for Abhimanyu’s peace of mind.

At the Goenka's house, Swarna returns to the house while Manish looks angry seeing her back.

Suhasini asks Manish to let go of his bitterness and celebrate the auspicious day together.

At the Birla house, Abhimanyu tells Manjari to let him go to Jaipur.

However, Manjari is not ready to let him go to Jaipur and asks Mahima to talk some sense into him.

Mahima questions Abhimanyu about Akshara’s involvement in the matter.

Meanwhile, Akshara passes through the Birla house and looks at it longingly.

In the meantime, Manjari strictly prohibits Abhimanyu from going to Jaipur.

Elsewhere, Dr Kunal brings them to a hotel while Maaya questions Akshara about her family, living in Udaipur.

However, Dr Kunal lies to Maaya and tells her that Akshara’s family is settled in the US.

Later, Akshara asks Dr Kunal about Kairav and is shocked to hear that Kairav is in India.

On the other hand, Abhimanyu is listening to Maaya’s song and wondering how could Maaya sing in Akshara’s voice.