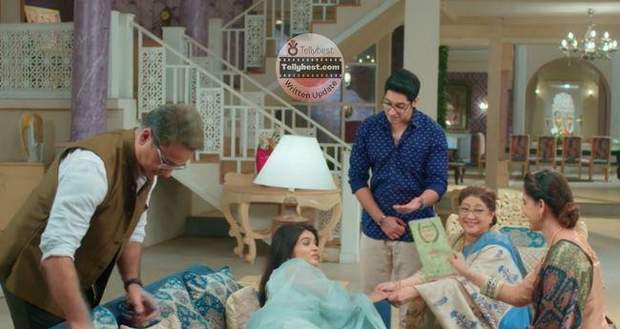 Today's Yeh Rishta Kya Kehlata Hai (YRKKH) 14th December 2022 episode starts with Abhimanyu bringing the bus to the house while everyone joins them singing and dancing, dressed casually in the clothes presented by Abhimanyu.

Among all these people Suhasini and Manjari look shy at wearing the western outfit for the first time.

Their excitement is evident in their dancing as everyone gathers around the bus.

Later, Akshara is surprised to see a bus seat adorned with pillows for her and Aarohi.

Afterwards, everyone boards the bus and a moment of friction happen when Mahima comes face-to-face with Kairav.

Abhimanyu calls them all Gorillas which is a combination of Goenka's and Birlas and tells them that the Bus will be moving at a distance of 45 km per hour and everyone is requested to enjoy the ride.

Suhasini tells everyone to keep on munching while travelling while Abhimanyu teases Akshara with Laddoos.

After a while, Manish calls the Birlas boring for not enjoying the journey and spending it in boring talks instead of singing and dancing.

Hearing the challenge in Manish's voice, Anand tells Abhimanyu to show the Goenkas what Birlas got.

Later, Swarna, Akshara and Suhasini are praising the resort. Suhasini tells Akshara about a nearby temple that is now on road less travelled but it used to be visited by pregnant women.

After a while, Birlas make fun of the luggage that Goenkas have brought with them while Abhimanyu puts his luggage aside as he has brought most of all.

Afterwards, Abhimanyu promises to have loads of fun activities while they are here.

Abhimanyu shows them the first activity of making tomato sauce.

Mahima and Aarohi object to the activity the most but are convinced after everyone insisted.

Meanwhile, Nishtha tells them to pick the chits from the jar and people with matching numbers will make a team and make sauce together.

However, Mahima gets paired with Kairav and expresses her anger and is ready to walk out of there.

Kairav stops her from leaving and asks her reason for being rude to her.

Manish also tells her to let go of the past and move on as the past has nothing but bitter memories for them.

However, Mahima tells them that it is Kairav who started the topic else she has no interest in dredging the past.

Meanwhile, Kairav tells her that it is better he leaves because he cannot stay where he is hated so much.

Mahima also tells them about leaving as soon as the driver returns.

© Copyright tellybest.com, 2022, 2023. All Rights Reserved. Unauthorized use and/or duplication of any material from tellybest.com without written permission is strictly prohibited.
Cached Saved on: Wednesday 25th of January 2023 09:09:04 PMCached Disp on: Tuesday 31st of January 2023 06:19:52 PM