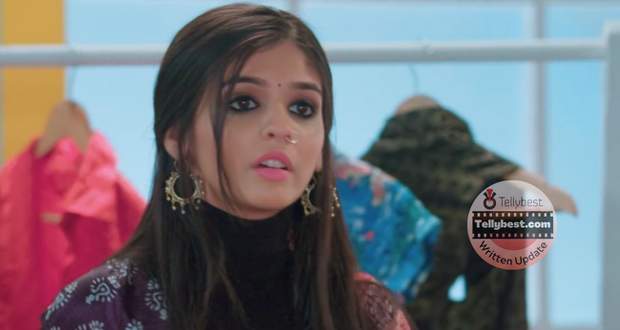 However, Ruhi enters the wrong CVV number thrice and hides the phone after seeing Aarohi.

In the meantime, Abhimanyu arrives at the hotel but lands in a pickle seeing his wallet empty of cash while his phone also troubles him.

Abhinav tells him to not worry and that he will collect it tomorrow.

Later, Abhinav comes home to find Akshara and Abheer sad and tries to cheer them for losing in the competition.

However, both of them begin to laugh telling him that he is fooled.

Later, Abhinav grows teary-eyed seeing Abheer’s trophy and a prize of 10001 rupees which Abheer deposited in the piggy bank meant for the next car.

Meanwhile, Akshara tells Abhinav to put his money in Abheer's fees piggy bank and gets angry hearing that the client has not paid again.

However, Abhinav is sure that Abhimanyu will not ditch him and tells her that he will get the money tomorrow.

Meanwhile, Abhimanyu is chiding Ruhi for getting his card blocked.

Ruhi asks him to perform an “Opraation” which puzzles Abhimanyu.

Ruhi explains to him that he operates on patients whose hearts get blocked and he can do the same with cards.

Later, Abhimanyu gets the news of his conference being delayed for three days and feels worried about passing the time.

The next day, Akshara is running after Abhinav asking him to give her his client name so she can go and get the money from him.

However, Abhinav wants to keep Abhimanyu safe from Akshara’s thrashing and is not ready to give his name.

Just then Abhimanyu calls him telling him about his delayed trip and asks him if he can show him the town while he is here.

He also assures her that he will give him the previous day's money and the rest of the trip's money in advance.

Abhinav thanks him and is about to take his name when Akshara gets burnt while cooking and Abhinav disconnects the call in panic.

Later, Abhinav goes to pick up Abhimanyu and presents him with a bottle of jam.

Abhimanyu sits in the car and Abheer’s photo calls to him.

Meanwhile, Abheer tells Akshara about the school trip that his school is taking them.

Akshara is shocked to see the trip which is going to Udaipur.

In the meantime, Abhimanyu asks Abhinav for being quiet and asks him what is worrying him.

Abhinav tells Abhimanyu that his wife's hand got burnt while cooking but she continued to call it a trifle and goes on about her work.

However, he tells Abhimanyu that he knows how much pain it must be causing her.

He also asks Abhimanyu that he must be aware of the feeling that how much the wife's pain affects the husband.

Abhimanyu feels sad and tells Abhinav that he is single.

Abhinav is shocked to hear that and asks him if he has used IVF to get Ruhi for a daughter.

However, Abhimanyu smiles at his innocence and tells him that Ruhi is his dead brother’s daughter but she is his lifeline.

Elsewhere, Akshara refuses to send Abheer on the trip but he becomes obstinate saying he is the only one who never goes to meet his grandfather who lives in Udaipur.

He tells her that it is only a matter of five days and he will go on this trip.

Meanwhile, on being told about the divorce, Abhinav asks Abhimanyu if he has really divorced the love he had for his wife.

© Copyright tellybest.com, 2022, 2023. All Rights Reserved. Unauthorized use and/or duplication of any material from tellybest.com without written permission is strictly prohibited.
Cached Saved on: Wednesday 25th of January 2023 09:51:52 AMCached Disp on: Tuesday 31st of January 2023 08:12:12 PM