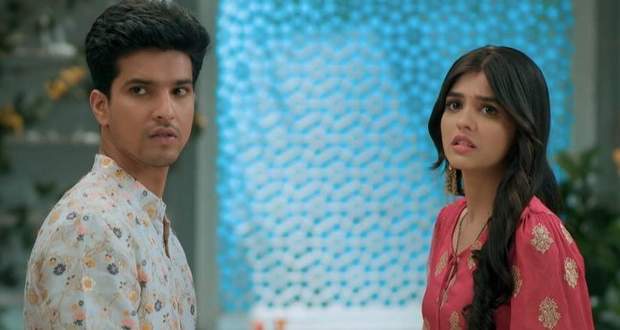 Akshara drags Abhimanyu with her to the lawn and asks him why he is pushing his decisions on Manjari.

Abhimanyu replies that he wants Manjari free from this toxic relationship where she is not given any respect by her husband.

Agreeing with Abhimanyu’s point, Akshara says that she also wants the best for Manjari but the decision should remain with her.

A divorce is a matter between a husband and a wife where the children do not have a say.

Abhimanyu states that Manjari is not strong enough to take that decision by herself so he has to take it on her behalf.

Akshara tells Abhimanyu that he can proceed with the divorce only if Manjari gives her consent on the matter.

As Akshara walks away, she trips on the table leg and almost falls on the floor making Abhimanyu rush to help her.

Both stare into each other’s eyes and turn around with awkwardness filling the silence.

Abhimanyu glares at Harshvardhan standing on the stairs and announces that his decision of getting Manjari a divorce is final.

Abhimanyu asks everyone why everybody remains silent whenever Harshvardhan abuses Manjari verbally and mentally.

Reminding everyone about Manjari’s sacrifices, Abhimanyu tells them to show a little bit of sympathy for Manjari.

With the wish of seeing his mother living with a smile, Abhimanyu decides not to step back from his decision.

Akshara comes up to Abhimanyu and burns one photo of Manjari and Harshvardhan while tearing the other one by hand.

Trying to imply that hasty decisions will burn down everything, Akshara asks Abhimanyu to calm down his anger and think about his actions.

Everyone from the family stands with Akshara making Abhimanyu leave.

Later, Akshara comes and sits beside Abhimanyu while he takes care of Manjari and asks if he needs Chamomile tea.

On her way, Akshara encounters Harshvardhan who tells her that he is impressed by her maturity and thanks to her for supporting him.

Akshara denies her supporting Harshvardhan and tells him that he deserves to be miserable because of his deeds.