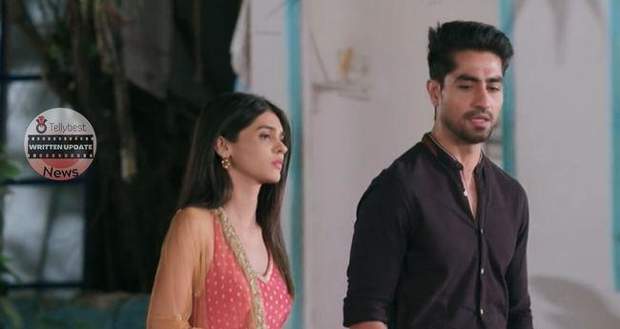 Today's Yeh Rishta Kya Kehlata Hai (YRKKH) 14th November 2022 episode starts with Akshara telling Abhimanyu that they will now be starting the celebration of his birthday.

Abhimanyu looks excited and tells her to bring it on.

Just then, Manjari, Parth and Shefali come out of hiding and present a dance performance on the song “Tum Jiyo Hazaron Saal”.

Just then Akshara notices Neil’s absence while Manjari tells her that Neil has to go to the hospital due to some urgent work and tells her to prepare for her performance.

Meanwhile, Manish is upset at Aarohi while Swarna tells them that Manjari and Akshara are messaging her to ask about their location.

Suhasini tells them that Akshara must have made many preparations and they should not spoil it by telling her about Aarohi’s problem.

Abhimanyu is very thankful to everyone and praises them for making his birthday special.

However, he asks for Neil who has yet to give his performance while Akshara tells him that he has gone hospital for some work.

Just then the Goenkas arrive at the Birla house and wish Abhimanyu.

Mahima sarcastically asks for Aarohi and points at Neil's absence as well.

Just then Aarohi and Neil come to the Birla house after tying the knot shocking everyone.

In the flashback, Neil recalls Aarohi coming to his office and locking them inside.

Aarohi tells Neil that she loves him and wants to take care of him.

Aarohi tells Neil that people like her and him are treated as second-class citizens because they are their step relationships.

She also coaxes Neil's insecurity about being illegitimate and tells him that he will never be given the rights that are due to him.

Showing prenuptial papers to Neil, she tells him that the papers are for both of them and she wants to secure his future with him.

At the lost resort, Aarohi hugs Neil and tells him that her life is meaningless without him and that she will die if they are not together.

Neil, being successfully manipulated tells Aarohi that he will not let her die and hugs her back.

Before Abhimanyu can proceed with his questioning, Akshara tells them to stop as they will celebrate Abhimanyu’s birthday first as that is the most important thing here.

After cutting the cake, Abhimanyu asks Neil to tell to explain himself.

Harshvardhan slaps Neil for taking such a big step while Abhimanyu asks Neil why has he married Aarohi and whether she has blackmailed him into marriage.

Aarohi tells them that there is nothing as such but Akshara tells her to stay quiet as no one is talking to her.

Meanwhile, Abhimanyu repeats his question and asks Neil how has Aarohi managed to convince him and if he has married her under pressure.

Akshara also tells him to tell the truth about what has made him marry Aarohi.

Neil tells everyone that he has married Aarohi out of love but Abhimanyu refuse to believe him and criticises Aarohi.

Aarohi becomes angry and she rebukes Abhimanyu for putting allegations about her.

© Copyright tellybest.com, 2022, 2023. All Rights Reserved. Unauthorized use and/or duplication of any material from tellybest.com without written permission is strictly prohibited.
Cached Saved on: Monday 21st of November 2022 01:21:07 AMCached Disp on: Thursday 1st of December 2022 11:12:36 AM