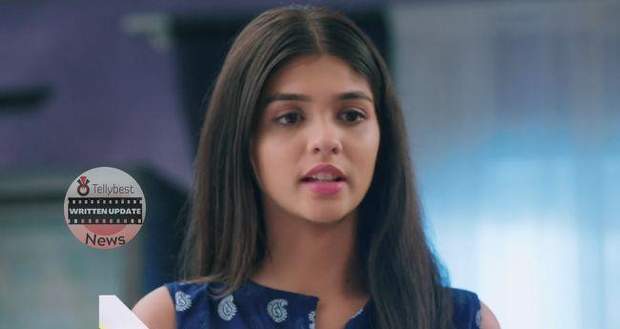 However, Aarohi questions Akhilesh about Akshara being at Jaipur and tells them about the call she received from the academy but Suhasini dismisses it.

In the meantime, Manish brings Sweets for Aarohi and assures her that he loves her a lot and tells her that Akshara's problems should not cloud her happiness.

He also tells her to call the boy and his family so that they can move things forward.

Later, Akshara comes to Abhimanyu’s room, telling him that Harshvardhan is sleeping in her room and she has nowhere else to go.

Later, Akshara recalls a romantic moment with Abhimanyu when he caught her off guard and enclosed her in his arms and feeling her nearness and how she teased him by sprinkling water on him and returning the romantic gesture by undressing him.

At the same time, Abhimanyu is not unaffected by Akshara’s presence and recalls a romantic moment in the past where Akshara's attempt to oil his hair landed them entwined on the bed together.

After a while, Akshara asks Abhimanyu where should she sleep.

Abhimanyu tells her that if she could not sleep on the bed then she is free to hang in the air and sleep invertedly.

Akshara looks exasperated and asks him where will he sleep.

Abhimanyu tells her that he will also sleep on the bed and there is nothing to fuss about.

Later, Abhimanyu and Akshara fight over the AC temperature and then Akshara outsmarts him by removing the batteries.

When Akshara could not sleep she leaves the room to order Pizza for herself while Abhimanyu questions her about her unhealthy eating style.

Their conversations turn to the painful subject of divorce where both of them blame each other for the divorce papers.

Later, Akshara walks away from Abhimanyu and would have fallen on the stairs when Abhimanyu catches her.

Akshara jerks herself free and her hand hits the railing hurting herself.

Just then the whole family comes out hearing the noises.

Akshara tells them that she has slipped and hurt herself.

Later, Neil tells Abhimanyu put a crape bandage on Akshara as he knows how much pressure to put on it.

At night, Abhimanyu watches Akshara sleeping and waves of pain engulf him as he feels the pain of being distant from Akshara despite the closeness.

The next morning, Akshara is trying to zip her dress but her injured hand pains her.

Abhimanyu sees her struggle and comes to assist her.

Akshara resists but Abhimanyu grabs her close and zips her dress while looking at Akshara’s complaining eyes.

© Copyright tellybest.com, 2022, 2023. All Rights Reserved. Unauthorized use and/or duplication of any material from tellybest.com without written permission is strictly prohibited.
Cached Saved on: Monday 21st of November 2022 07:32:56 AMCached Disp on: Monday 5th of December 2022 12:10:14 AM