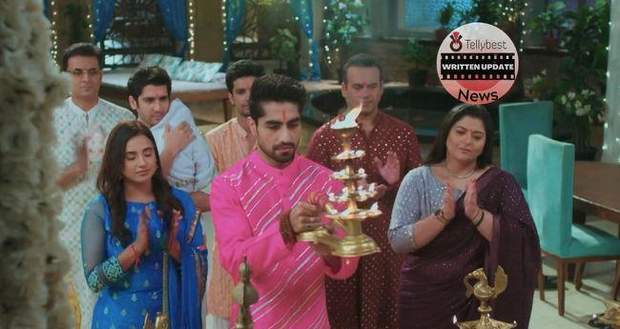 At the same time, Aarohi arrives at Birla's house and gets a phone call from Akhilesh.

Just then Anand’s voice is heard in the background making Akhilesh suspicious.

Aarohi gets irritated and blames him for suspecting her of being at Birla’s.

Afterwards, Aarohi hands over the paper to Neil and asks about Abhimanyu.

Later, Aarohi comes to Abhimanyu to ask him why he called her about Akshara the other day.

Abhimanyu tells her to focus on her profession and not become Sherlock Holmes.

Aarohi is not deterred and decides to find out one way or the other.

On the other hand, Akshara is trying to contact Kairav and asks Dr Kunal to call Kairav else she will expose his truth to Maaya.

After the call, Akshara is relieved to see Kairav ok and turns her attention to Abhimanyu.

Meanwhile, Aarohi tells Mahima about Abhimanyu’s call while Mahima has similar suspicions and suspects that Jaipur is somehow related to Akshara.

Later, Akshara arrives at the Birla house and seeing so many people gathered for Ganpati Visarjan feels a little overwhelmed. However, she decides to see Abhimanyu before the concert.

In the hotel, Maaya asks about Akshara and praises her for her dedication and feels grateful for her sacrifice.

Meanwhile, Manjari comes to invite Abhimanyu to get ready for the veneration and tells her that she is taking out her clothes.

After a while, Akshara comes to her room, climbs the window and relives moments there while feeling sad to see the room changed.

Just then, Abhimanyu asks Manjari for the Kurta thinking she is there.

Akshara passes Abhimanyu his Kurta and Janeyu (sacred thread) feeling happy to be so close to Abhimanyu.

She imagines coming in front of Abhimanyu and hugging him with happiness.

Just then Mahima calls her and she goes down instructing him to come soon.

Later, all the people are busy celebrating Ganesh Chaturthi while Akshara watches from the balcony.

Akshara recognises the child Shivansh and feels happy that God is trying to bring them together since her arrival at Jaipur.

As she stands to leave, a vase falls down due to her clumsiness and alerts everyone.

Harshvardhan offers to go and check upstairs while Akshara runs to escape being noticed.

Finding no one, Harshvardhan concludes that it must be the air that made things fall.