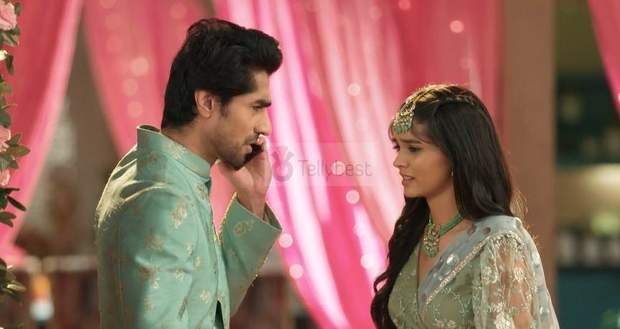 Kairav tells him that he does not want to marry Anisha.

Abhimanyu tells Kairav to tell him whether something happened between him and Anisha.

However, Kairav repeats himself and goes away.

Mahima is in shock and questions Anisha about what has gone wrong.

Anisha runs after Kairav saying she will get him back in a few minutes.

In the meantime, the whole family is panicking and wondering what has gone wrong between Anisha and Kairav.

On the other hand, Anisha requests Kairav to not break the marriage today as she cannot tell her truth to everyone.

Kairav tells Anisha that he is not ready to keep his family in dark and if she will not tell her family today he will.

As he is about to leave the terrace Anisha climbs the ledge and tells Kairav to not say anything to anyone and not break off the engagement else she will jump.

Kairav comes running and tells Anisha to come down and not do anything stupid.

However, Anisha continues to ask him to not break the marriage and keeps shifting back.

At an abrupt moment, Anisha’s feet slip and she falls from the ledge.

Kairav is shocked to see Anisha lying motionless on the roof of the car with her head bleeding.

Meanwhile, Abhimanyu is asking Akshara to tell him what has happened between Kairav and Anisha and whether it is something big or small.

Akshara tells him that it will be better if Anisha and Kairav tell them the truth.

Just then Abhimanyu gets the call from the ambulance telling him that Kairav has taken Anisha to the hospital.

Everyone rushes to the hospital to find Anisha badly wounded.

Abhimanyu tells Anisha that they are all here and love her very much.

However, Anisha could not live long and died calling Abhimanyu’s name.

Abhimanyu blames Kairav for killing Anisha while he keeps telling him that Anisha's feet slipped and he did not kill her.

Just then, some stranger also accuses Kairav, telling everyone that it was Kairav who killed her and Anisha was begging him but he did not listen to her.

Akshara and her family defend Kairav telling everyone that Kairav could never kill Anisha.

Mahima also slaps Kairav and accuses him of Anisha’s death.

After a while, Akshara tells everyone, to not play a blame game at the moment as Anisha has just died and she will not get peace with all this and they should table the discussion for another day.

© Copyright tellybest.com, 2020, 2021. All Rights Reserved. Unauthorized use and/or duplication of any material from tellybest.com without written permission is strictly prohibited.
Cached Saved on: Sunday 2nd of October 2022 05:10:17 AMCached Disp on: Thursday 6th of October 2022 03:09:01 PM