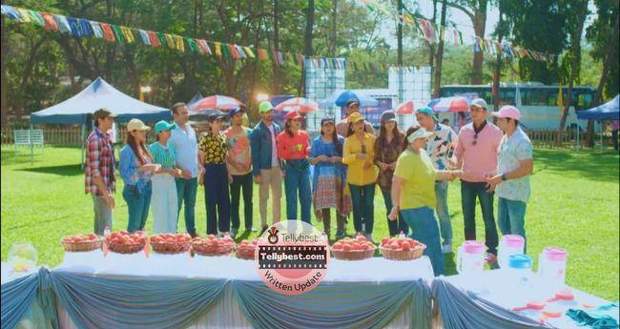 Today's Yeh Rishta Kya Kehlata Hai (YRKKH) 15th December 2022 episode starts with Akshara being sad about the Kairav and Mahima’s situation and asks Abhimanyu to try to stop them.

Abhimanyu agrees with Akshara and goes to make arrangements.

Suhasini and Manish are upset at Mahima’s rude behaviour towards Kairav.

Meanwhile, Aarohi is happy to think that if the picnic gets spoiled then she will get the chance to spend time with Neil.

In the meantime, Abhimanyu is waiting for Kairav on the bus while Akshara asks Mahima to give her two minutes of her time.

Later, Mahima hears Kairav telling Abhimanyu how empty he feels after Anisha and that he has so much guilt for not being able to save Abhimanyu.

Mahima’s anger drains away hearing Kairav's true feelings which are similar to her own.

Kairav tells Abhimanyu that he loves Anisha as Mahima does and wants to share her pain with her but her accusing eyes keep telling him it was his fault alone.

Akshara tells Mahima that she wanted her to know how Kairav feels about Anisha.

Mahima tells Kairav that everyone will go together as they came and leaves from there making Akshara and Abhimanyu happy.

After a while, all the family members are surprised to see Mahima and Kairav busy making sauce with Akshara and Abhimanyu and their happy spirit returns while they all feel light.

Later, they all enjoy making sauces and playing with each other while making them.

After a while, Abhimanyu impresses Akshara with his caring skills by presenting her with things she might need on the trip.

Later, Abhimanyu shows the lucky bands that he has brought for Akshara as a gift.

Abhimanyu puts on a band on Akshara’s hand to bring a lucky charm.

Meanwhile, Abhimanyu calls Akshara on her radio and flirts with her asking her about the gift.

After a while, the game begins with Anand who is given a task to tell Mahima he loves her.

Afterwards, come Aarohi’s turn and Neil asks her if there is anything that she would like to tell about her pregnancy that she hasn't told him yet.

After a while, Aarohi looks worried for a while and then fibs about feeling burps more often now.

Everyone laughs at Aarohi's innocent fib while Swarna tells her that it is not normal in pregnancy.

However, Akshara looks closely at Aarohi’s nervousness and prays that she is not hiding anything.

Shefali overhears Akshara and tells her that she hopes the same as she has heard Aarohi talk to someone about lying and then she was looking more nervous than now.