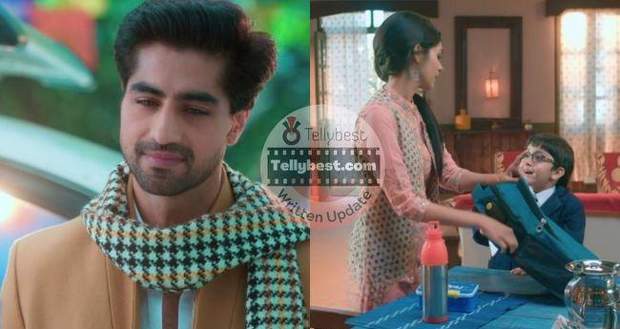 Today's Yeh Rishta Kya Kehlata Hai (YRKKH) 15th January 2023 episode starts with Akshara making her jam and thinking about past events and praying to God to leave her present simple and not complicate it like her past.

Abhinav brings Abhimanyu to the church and invites him to light a candle.

However, Abhimanyu tells him that he no more believes in God.

Abhinav tells Abhimanyu that a good person never disrespects God despite being angry with him.

Later, Abhinav prays for Abhimanyu to get his belief back for his sake.

Just then Akshara comes to the church with a box of her jam to donate and saves Abhimanyu’s candle from falling.

Later, Abhinav makes Abhimanyu hide inside a confession box to save his busybody neighbour who has had a record of talking for ages.

Meanwhile, Akshara also comes inside thinking to make a confession but stops at the last minute while Abhimanyu opens the window to check up on the busybody.

Later, Abhinav drops Abhimanyu at the hotel while Abhimanyu asks him to introduce him to local food.

Abhinav gives him his lunch pack telling him this is the best food of Himachal which will make him chew his fingers along with the food.

Later, Abhimanyu sits to enjoy the food and feels that he has come home.

Meanwhile, Akshara is lost in her thoughts while making jam when Abhinav comes home and jokes about jam.

However, Akshara tells Abhinav about the money problem and asks him about getting money from his passenger.

Just then Abheer comes there and overhears Abhinav and Akshara’s argument.

He comes to Akshara and tells her that he will not go on the trip so does not need to worry about the money.

Abhinav feels ashamed at the lack of money and assures Akshara that his passenger will pay him soon.

Meanwhile, Abheer decides to have a meeting with Abhinav’s Dilwale passenger who is not paying Abhinav his money and causing tension for his mother.

At the tea and Samosa point, Abhinav goes to get the Samosas while Abheer arrives with his football and a friend to attack Abhimanyu for putting Akshara under stress.

However, his friend back down seeing Abhimanyu’s personality but Abheer decides to go on with his plan and attacks Abhimanyu.

Abhimanyu is surprised by a kid purposely hitting him with a ball and tries to scare him but he remains on the spot without being intimidated.