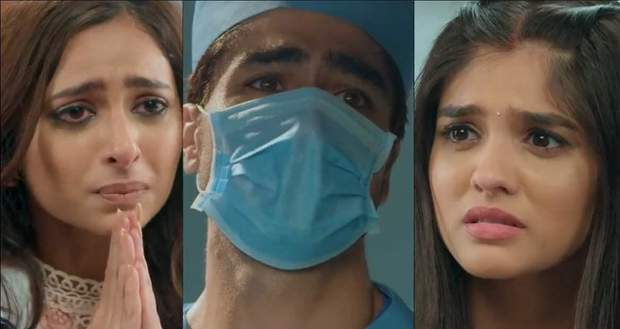 Today's Yeh Rishta Kya Kehlata Hai (YRKKH) 15th July 2022 episode starts with Akshara crying and thinking of Aarohi while Abhimanyu assures her that it is ok.

Just then Kairav calls Akshara to ask after her and Abhimanyu.

Manish tells Abhimanyu that they support his decision.

Before leaving Akshara returns Abhimnayu’s ring to him and asks him why has he not told her about the MRI and if anything is wrong with him.

Abhimanyu lies to Akshara saying it is to satisfy Anand.

Coming out, Abhimanyu meets Anand and who is holding his MRI report.

To assure Akshara Abhimanyu looks at the report nonchalantly and lies about the result.

After Akshara leaves Abhimanyu tells Anand that his nerve is damaged at the time of the fire.

Anand tells him that he will immediately send his report to the best neurologist and tells him to not perform any surgery meanwhile.

Later, Akshara is thinking of Aarohi and goes to sleep without calling her.

After a while, Abhimanyu comes home to find Akshara asleep.

Seeing Akshara’s dupatta, Abhimanyu tries to stitch them so that he can observe the extent of his problem.

The next morning, Akshara is amazed to see Abhimanyu asleep for a long time and wakes him up.

Akshara sees her dupatta placed on a different table and wonders about it before deciding to go to Goenkas's house.

Akshara goes to Aarohi’s room telling them that it is expected of her to be angry.

Akshara brings food for Aarohi while Aarohi tells her to go and celebrate with Abhimanyu who should install a statue of her in the home and hospital because she is Sant Akshara.

Aarohi accuses Akshara of not having any dreams nor does she care about them but she had dreams and had worked day and night to make them come true.

Aarohi tells Akshara that for her, life has always been easy as she is undeserving but lucky.

However, she has studied hard, did nightshifts and everything and got a memo in return.

Aarohi calls Akshara jealous and tells Akshara that the Birla hospital music department is a fraud.

Akshara stops her and tells her that talent is personal and gives personal satisfaction.

© Copyright tellybest.com, 2022, 2023. All Rights Reserved. Unauthorized use and/or duplication of any material from tellybest.com without written permission is strictly prohibited.
Cached Saved on: Monday 21st of November 2022 06:40:29 PMCached Disp on: Friday 2nd of December 2022 03:37:01 PM