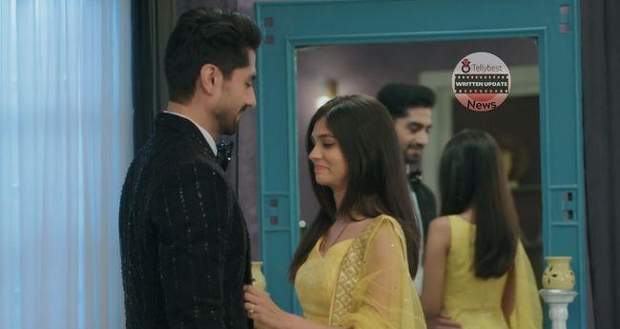 Today's Yeh Rishta Kya Kehlata Hai (YRKKH) 15th November 2022 episode starts with Manish shouting at Neil and Aarohi and regretting that he thought that she would change.

He even says that she should have been shunned before only.

Meanwhile, Harsh also asks them why they married in such haste and in secret.

At the same time, Manish reminds Aarohi that he said no harm should come to their family name.

Angrily, Manish cuts off all his ties with Aarohi and says Akshara is their only daughter.

Aarohi screams at him and compares herself with Akshara and says that this is what has always been happening, the Goenka leave without any wait.

Abhimanyu grabs Neil's hands at the same time so does Aarohi.

Aarohi and Neil tell everyone that they are leaving the Birla house and present a document which states that Neil and Aarohi aren’t interested in Birla's business money and they revoke their right to it.

Seeing this, Abhimanyu starts clapping at how cunning and talented Aarohi is, he warns Neil and tells him to back out.

However, Aarohi becomes furious and tells Abhimanyu that this is no game where he can back out anytime.

Neil confronts Abhimanyu and asks him politely that if they can’t accept this marriage then at least he can do is wish them luck.

Akshara calms Abhimanyu with her expressions and says if Neil wishes to leave he should.

Abhimanyu and others also tell them to leave.

Neil says sorry if he has said or done anything wrong, and wishes Abhimanyu for his birthday.

Meanwhile, at the Goenka’s, Manish declares that no one will keep any relationship with Aarohi or else he will not have anything to do with them.

At the Birla's, Manjari is heartbroken.

Thinking about her family, Akshara calls bade papa but her calls are not received, so she calls Kairav and asks what is happening.

Meanwhile, Manish starts getting chest pains and their doctor is out of town.

Kairav tells this to Akshara, who decides to go over to Goenka’s with Abhimanyu.

Abhi checks on Manish and prescribes medicines and tells them that it could have been a heart attack.

On the other hand, Neil and Aarohi enter a small hotel room, and Neil tries to calm her.

Aarohi calls Mahima to get entry into Birla's house and tells her that she is the only one who is on her side.

Abhimanyu tells Akshara that she should stay with Manish and he will leave for home.

Kissing each other’s forehead, Akshara wishes him a happy birthday, and he leaves.

© Copyright tellybest.com, 2022, 2023. All Rights Reserved. Unauthorized use and/or duplication of any material from tellybest.com without written permission is strictly prohibited.
Cached Saved on: Monday 21st of November 2022 02:02:53 AMCached Disp on: Sunday 4th of December 2022 11:36:52 PM