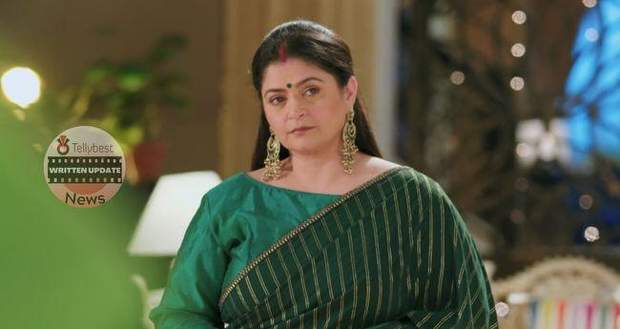 Today's Yeh Rishta Kya Kehlata Hai (YRKKH) 15th October 2022 episode starts with Akshara telling Abhimanyu that she will do it herself.

However, Abhimanyu grabs her towards him and ties her laces.

Manjari feels it odd that Abhimanyu has sent Nishtha and wonders if everything is all right between them.

Meanwhile, Nishtha talks about learning music while Akshara gives her the form for her music academy and tells her to take permission from family members and join it.

Meanwhile, Anand talks to Neil about a proposal for him and asks him if he likes someone.

Just then Aarohi calls Neil and overhears about Neil's proposal.

Neil denies liking anyone and avoids eye contact with Abhimanyu.

After a while, Aarohi is shocked to hear about Neil getting engaged.

On being asked, Manjari shares with Shefali her concern about something missing between Abhimanyu and Akshara.

Mahima overhears Manjari’s concern and tells her to welcome the change if it is for good.

After a while, Neil calls Aarohi who sarcastically congratulates him for getting engaged.

Aarohi's anger rises with Neil's appeasing tone and she tells him to tell everyone about their relationship.

Neil looks worried and asks for some time which makes Aarohi angrier and she tells Neil to forget about her.

Meanwhile, Mahima goes to Nishtha’s room to talk to her about her studies but becomes furious to see Nishtha filling out Akshara’s music academy form.

Meanwhile, Akshara goes to Mahima’s room to get Manjari’s medicines.

Mahima berates Nishtha for not focussing on her medical studies and asks her who has given her this form.

Afterwards, Akshara is talking on the phone while searching for medicines in Mahima’s room and overlooks the proof of Kairav’s innocence.

She also insults Akshara’s singing talent and tells her to not try and influence Nishtha with her useless career choices.

However, Akshara tells Mahima not to force her choices on Nishtha and tells her that people in this house are afraid to express their feelings and it is because of that Anisha is not with them anymore.

Just then Abhimanyu asks Akshara to apologise to Mahima.

Akshara tells him that she can apologise for the way she said things but not for what she said.

She also tells them that there is music in everything and they should not force their choices on others.

Later, Mahima feels outraged and resolves to not let Akshara back into their life.

Meanwhile, Akshara texts Manish about being in a workshop while Manish suspects Akshara of hiding something.

Afterwards, Akshara and Abhimanyu have a row about Akshara interfering in Birla's family matters despite having no connection to them.

Abhimanyu's condescending nature anger Akshara and he tells her that she is leaving the house.

© Copyright tellybest.com, 2022, 2023. All Rights Reserved. Unauthorized use and/or duplication of any material from tellybest.com without written permission is strictly prohibited.
Cached Saved on: Monday 21st of November 2022 05:20:50 AMCached Disp on: Monday 5th of December 2022 12:48:14 AM