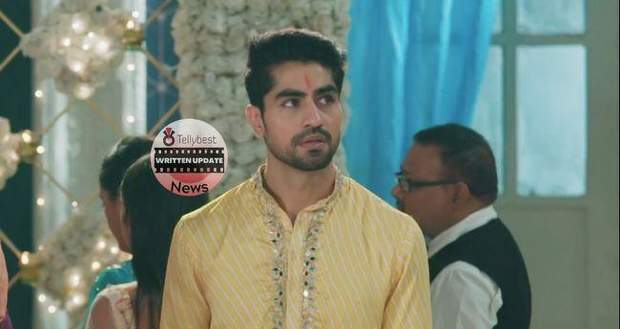 Today's Yeh Rishta Kya Kehlata Hai (YRKKH) 15th September 2022 episode starts with Manjari asking Abhimanyu to ask whatever he wants from Lord Ganesh and it will be fulfilled.

Abhimanyu asks Lord to help him in reaching the truth behind the voice and tells him that he has planned something big for tomorrow.

Outside the house, Akshara tells Abhimanyu that soon she will be with him.

Meanwhile, Swarna is happy to meet Aarohi and asks her where she had been.

Aarohi lies about going to research work while Suhasini asks her why she smells of incense if she has gone to work.

Just then, Aarohi gets a call and she goes away without answering Suhasini while Akhilesh tells everyone that Aarohi has been behaving weirdly for a long time.

Manish also prays for her sake that she is not lying.

Meanwhile, Akshara meets her detective and asks to see the results as she has very little time.

On the other hand, Abhimanyu calls Maaya to invite her to a private event whereas Maaya tries to refuse him.

However, Abhimanyu charmed her into agreeing.

Later, Maaya convinces Akshara to accompany her to an event.

The next day, Abhimanyu is waiting at the Ganesh Visarjan for Maaya to arrive with Akshara.

Akshara goes to stand away from her while Maaya looks around for her handsome and hot fan Abhimanyu.

Abhimanyu immediately finds Maaya and hands over the mike to her to sing.

Maaya tries to excuse herself but Abhimanyu is adamant.

Maaya announces at the mike that she is going to sing the song to attract Akshara to her.

Later, the announcer informs the audience to make a wish by throwing a coin in the pool where Ganpati will be immersed.

Akshara is not happy with Maaya’s decision but comes to her rescue while putting a Veil on her face.

As Maaya sings the song Abhimanyu looks for Akshara but couldn't find her.

However, Abhimanyu is sure that Akshara is nearby and tells her that soon he will find her.

After the performance, Akshara and Abhimanyu make a wish in the pool to meet each other.

Somehow, they lose balance and together fall in that same pool and come face to face with each other.