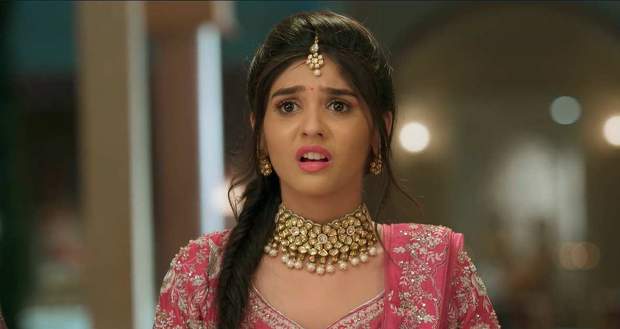 Soon the dance face-off between the groom's family and the bride’s family begins with Abhimanyu and Akshara leading their teams.

Abhimanyu’s team is performing unexpectedly well on the song  “Aankh Maare” sung by Kumar Shaanu in the background.

Goenka's are amazed to see the performance of Abhimayu's team who are hell-bent on winning with their exceptional moves.

Meanwhile, Mahima gets tired of holding the letter and hands it over to the waiter with instructions to be given to the investigator.

During the performance, Akshara throws something under Abhimanyu’s feet making him fall.

Abhimanyu takes it sportingly while Akshara shouts with glee about winning.

Harshvardhan takes the matter of Akshara’s cheating seriously while the Goenka calls it part of the fun.

Later, Harshvardhan talks to Abhimanyu and tells him that he should never trust anyone so implicitly that when that person cheats on him it breaks him forever.

After a while, Akshara goes to make her special Kachori for Kumar Shanu to thank him for coming to her function.

Under the hooting of Birlas and Goenkas, Abhimanyu also goes to help Akshara.

In the kitchen, Abhimanyu accuses Akshara of cheating while Akshara says everything is fair in love, war and dance.

Elsewhere, a private investigator comes in looking for Abhimanyu.

Meanwhile, Akshara makes Kachori while Abhimanyu romances Akshara along with helping her.

The investigator is trying to call Abhimanyu while Mahima spots him.

In the meantime, Kumar Shanu loves the taste of Kachoris and Abhimanyu asks him to sing one more song for them.

Soon the waiter passes the envelope to the investigator while Mahima feels overjoyed at her success.

Unfortunately, the investigator loses the letter which finds its way to the table and gets wet by Akshara’s water bottle.