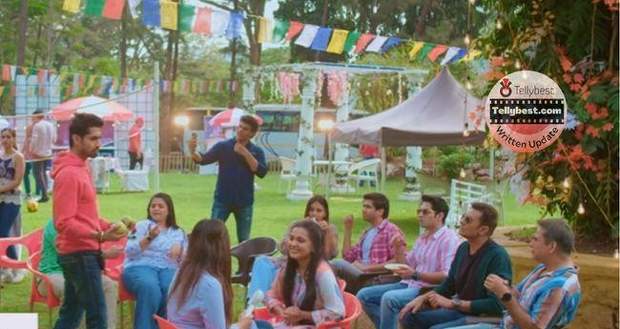 Today's Yeh Rishta Kya Kehlata Hai (YRKKH) 16th December 2022 episode starts with Shefali telling Akshara that she heard Aarohi talk to someone on the call and saw her tensed and worried.

Akshara gets confused and tries to read Arohi's mind who does look the most anxious of them all in the garden.

Meanwhile, Abhimanyu introduces the game of spinning the wheel on which several truths and dares are written.

Manjari goes first and she gets the truth about telling everyone about her first love.

Abhimanyu sees her puzzled expression and says she can spin the wheel again but Manjari replies that it is all well to talk about something like love which is beautiful.

Manjari tells everyone that after she saw Harsh, she knew he was going to be her first love while Akshara comes behind Manjari to hold and cuddle her.

The next turn is of Parth and slowly everyone gets their chance except Abhi who is the host.

He spins the wheel last but Akshara cutely comes up to him and states she will do the honors for him.

The arrow gets landed on a dare of picking out guavas from a tree and Abhimanyu denies doing so.

However, when Akshara tells him softly that she is hungry, Abhimanyu is on his toes to get the guavas for his pregnant wife while all the family members laugh out loud.

As Abhimanyu goes to pick out some guavas for Akshu, Akshu tells Abhimanyu that she will miss her kids' father through a walkie-talkie.

Later, Akshara sees a child escape into the forest and tries to stop him but he walks ahead.

Without informing anyone behind, Akshara follows the child into the forest while Abhimanyu arrives back in the garden with two guavas in his hand.

However, when he doesn't see Akshara and no one knows about her whereabouts as well, including Manjari, he gets anxious.

On the other hand, Akshara shouts for the kid but gets lost in the forest.

Meanwhile, Abhimanyu instructs Shefali, Mahima, & Manjari to check the resort bathroom but Akshara is not there as well.

All the noises around Abhimanyu become blurry as he overthinks about Akshara's safety.

Just then, Kairav sees the walkie-talkie that was in Akshu's hand kept on the table while the kid who Akshara followed returns back to his parents.

Abhimanyu worriedly asks the kid if he saw any 'Didi' walk into the forest but the child denies it.

Abhimanyu goes inside the forest to search for Akshara himself, grumbling that in five minutes she vanished.

Meanwhile, all the Birla ladies scold the resort manager for not fencing the forest area.

Mahima screams at him since Akshara's pregnancy situation is critical while Kairav loses sight of Abhimanyu in the forest and tells Manish about it.

However, the security guard comes and asks everyone to leave the forest since the Resort Manager has sent some men to search for Akshara and Abhimanyu.

On the other hand, Akshara grows anxious and slips on wet grass, falling down and hurting her head.

She becomes unconscious for a while but when glimpses of Abhimanyu crying in the hospital to her resurface, she comes awake.

Abhimanyu also finds Akshara's bracelet on his way into the forest and gets scared for her.

Sitting up, Akshara starts crying when she sees little blood on her fingers, asking God not to let anything happen to her babies.

However, the blood oozes out due to the thorn that gets stuck in Akshara's jeans and she pushes herself against the bark of a tree to pick it out since it is excruciatingly painful.