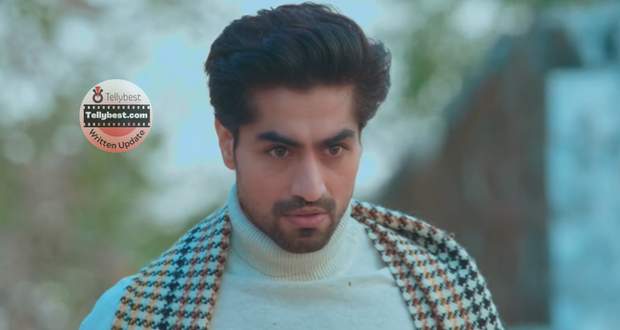 Today's Yeh Rishta Kya Kehlata Hai (YRKKH) 16th January 2023 episode starts with Abhimanyu coming to the football and with full fanfare throwing it to Abheer and mocks him when he shrinks.

Abheer tries to run when he asks for his father but Abhimanyu catches him and lifts him up in his arms.

Later he chides her for soiling his clothes while Abheer chides him for keeping someone's money.

Abheer shows him the power of those Milk teeth (Doodh Ke Dant) and bits Abhimanyu to free the muffler and runs away telling Abhimanyu to get the muffler after paying his parents or else this will become a nice bedsheet for his colony’s cat.

Just then Abhinav comes back with Samosa and tea and is shocked to see Abhimanyu’s soiled clothes.

Meanwhile, Abheer is sitting on the sofa lassoing (playing with) Abhimanyu’s muffler and tells Akshara that she does not need to worry about the money anymore.

Just then Abhinav comes and is shocked to see that the brat was his child.

Abheer tells Akshara that she is the one who had taught him to fight his corner and bite and run if someone tries to catch him.

However, Abhinav tells him that it was for self-defence and not to misbehave with elders.

Akshara tells him that he should not involve himself in elderly matters and tells her that he will have to apologise to the passenger for what he did.

However, Abheer refuses to apologise and walks out in anger.

Abhinav goes to appease him while Akshara picks up the muffler to clean it and feels a very familiar sensation touch her and puts it back hearing the argument.

Abhinav is convincing Abheer to apologise while Abheer tells him that Abhimanyu deserves what is coming to him as he has caused a fight between them.

Akshara tells Abheer that two people never fight because of the third person and that the passenger has not caused any conflict between them.

Meanwhile, Abhimanyu is feeling alone at the loss of Ruhi’s muffler and eats Akshara’s jam.

Elsewhere, Nishtha comments on Shefali’s loud makeup while Manjari chides Nishtha for teasing Shefali and tells Shefali to come to her if Parth says anything to her.

Later, Manjari shares with Shefali her worry about Abhimanyu being stuck in his life and leading a life of sadness and misery.

Just then Swarna comes there and Shefali tells Manjari to share her worries with her as she understands her pain pretty well.

After a while, Manjari tells Swarna about her desire to marry Abhimanyu to Aarohi so that they can remove the loneliness from their lives.

Swarna tells her that she cannot say anything without consulting Manish and Suhasini.

Meanwhile, Abhimanyu’s muffler gets thrown to the fireplace between Abhir and Abhinav’s argument and Akshara rushes to save it.

Later, Abhinav tells him that they will go to Abhimanyu’s hotel which is near his football field.

After a while, Abhimanyu gets a surprise visit from Abhir who sprays his face pink and later returns his muffler.

Abhimanyu recognises him and asks him why is he angry with him.

Abheer explains to him that his not paying money makes Abhinav the target of Akshara’s scolding and that is why he attacked him.

Abhimanyu apologises to him and tells him that he will pay his father very soon.

However, Abhir is not convinced and paints Abhimanyu’s mirror “Paisa Chor”.

Abhimanyu runs after him leaving his room open.

© Copyright tellybest.com, 2022, 2023. All Rights Reserved. Unauthorized use and/or duplication of any material from tellybest.com without written permission is strictly prohibited.
Cached Saved on: Wednesday 25th of January 2023 10:01:21 AMCached Disp on: Sunday 5th of February 2023 03:36:04 AM