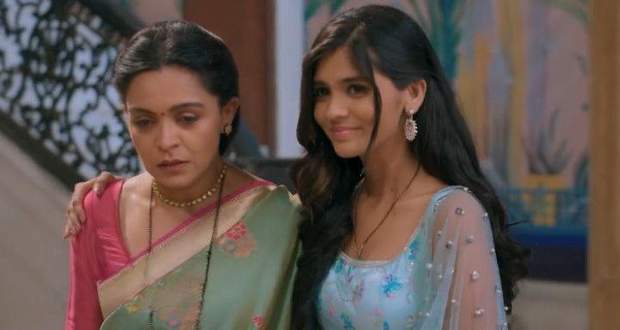 Akshara asks Parth to hold onto Manjari and runs after Abhimanyu only to find him gone from there.

Abhimanyu rides his motorbike in anger and receives a call from doctor Rohan who asks him where he is to inform him about a patient.

Suddenly, Akshara appears beside Abhimanyu on her motorcycle and rides simultaneously to him.

Abhimanyu increases his speed and tries to escape from Akshara but she stops him by coming in front of him from nowhere.

As Akshara gets off the bike to talk with Abhimanyu, he leaves the bike and starts to walk by himself as he does not want to talk to her.

Suddenly, the rain starts and makes both Abhimanyu and Akshara wet.

Akshara comes to Abhimanyu with a plastic tarp but Abhimanyu walks away from her in the rain.

Seeing Abhimanyu, Akshara also throws away the tarp and decides to get wet under the rain making Abhimanyu feel concerned.

Abhimanyu comes to Akshara and covers her under his shirt while they walk together to come and stop under a shade.

Akshara tries her utter best in convincing Abhimanyu with her gestures of sorry but Abhimanyu does not budge.

Meanwhile, Manjari prays to the god about protecting both Akshara and Abhimanyu and bringing them home safe and soundly.

Abhimanyu tells Akshara that he is angry with her for interfering in the internal family matters which led to Manjari misunderstanding her.

Akshara still remains stiff on her judgment of letting Manjari decide for herself which irritates Abhimanyu who knows that Manjari will never take that step by herself.

Trying to make Abhimanyu understand, Akshara asks him to stop forcing his own decisions on Manjari like Harshvardhan.

This statement triggers Abhimanyu who asks Akshara how she can compare him to the person he loathes the most in the world.

Akshara tries to explain to Abhimanyu that she did not mean it like that but Abhimanyu refuses to budge.

© Copyright tellybest.com, 2022, 2023. All Rights Reserved. Unauthorized use and/or duplication of any material from tellybest.com without written permission is strictly prohibited.
Cached Saved on: Monday 21st of November 2022 10:14:38 AMCached Disp on: Monday 5th of December 2022 12:57:37 PM