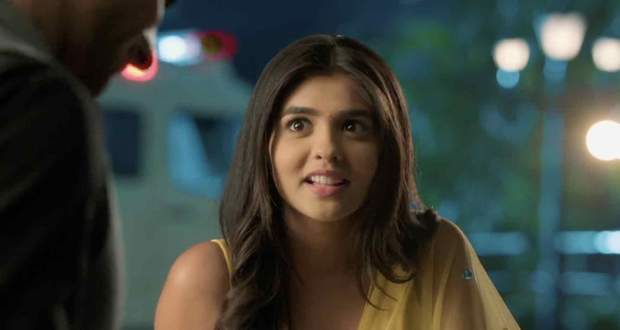 Akshara gets teary-eyed and hugs Kairav tightly showing her gratitude and affection towards him.

The Goenkas gather around Kairav and Akshara in the hall.

On the other hand, Arohi keeps on staring at the card, and with an intention of spoiling it, she picks up a paint bottle in her hands.

Before Arohi could spoil the card, Akshara stops her and makes an excuse.

Later, Akshara goes to meet Abhimanyu at the Birla house.

The two love birds tease each other and spend some quality time together with Akshara showing Abhimnayu the card Kairav has designed for their wedding.

At the hospital, Arohi overhears nurses gossiping about Abhi and her about how they believe Akshara is the best choice in comparison to Arohi.

The conversation annoys Arohi and subconsciously thinks that they will get to know tomorrow about who is the best.

The next day, before leaving for the temple, Arohi asks Kairav if she can bring the card for the wedding.

At the same time, Swarna puts a basket over the card, making Arohi leave it at home.

Later on, everybody gets into the car leaving Akshara at home.

Deciding to drive herself to the temple, Akshara leaves the Goenka house and Abhimanyu leaves from hospital parallelly.

On her way, a vendor along with his partners brings his cart suddenly in front of Akshara’s car and argues with her to give money.

Abhi arrives there when one of them holds Akshu’s hand insolently, growling at the vendor to leave Akshara’s hand.

Before Abhi can get into a fight with them, Akshara asks him to run away from there without fighting.

Later on, Arohi gets surprised to see Abhi and Akshara coming together from the temple, overcoming all the obstacles.