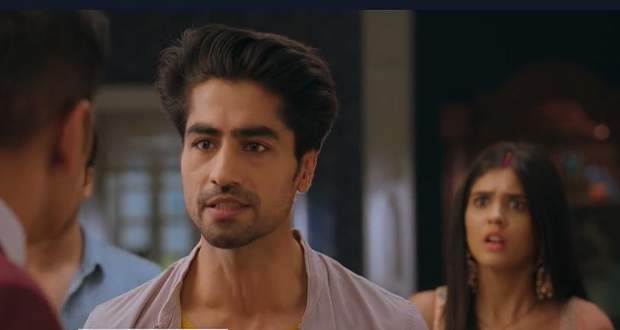 After a while, Manjari tells them that she is thinking of performing Aksahra’s post-wedding rituals and thinking of inviting the Goenkas.

Harshvardhan gets irritated to hear about another ritual and berates Manjari for still being in wedding mode.

However, Anand supports Manjari and asks both Mahima and Harshwardhan to co-operate.

Parth asks Manjari and Akshara to begin breakfast but Harshvardhan's loud voice brings Manjari into action and she goes to the kitchen to get his desired thing.

Meanwhile, a loud crack makes Akshara and others jump while Abhimanyu stands staring at Harshvardhan angrily.

Abhimanyu and Harshvardhan have a tussle while Manjari and Akshara suffer the consequences.

Manjari braves her tears and tells Akshara that she will send breakfast to their room while Akshara looks puzzled and stressed.

Meanwhile, Goeankas are happy to receive the invitation from Manjari and are excited to meet Akshara in her new home.

On the other hand, Akshara is reliving the breakfast in Birla's house and is still in shock while Abhimanyu tries to cheer her by dancing for Akshara.

However, Akshara’s mood is still sad with Abhimanyu’s behaviour at breakfast.

Abhimanyu apologises to Akshara for things going sideways ever since her arrival and tells her that this is his reality and she knows about his relationship with Harshvardhan.

Later, Abhimanyu is getting romantic when Neil barges in and gets scolded by Abhimanyu while Akshara sides with him.

After a while, Akshara arrives downstairs dressed to kill while Abhimanyu stares at her with love.

Just then Akshara runs towards Goeankas standing at the door and hugging them with longingness.

Manjari welcomes the Goenkas for coming at short notice and asks for the refreshment to be brought in.

Anand's mind is elsewhere when Manish talks with Anand and gets ignored while Abhimanyu feels bad about Anand's behaviour.