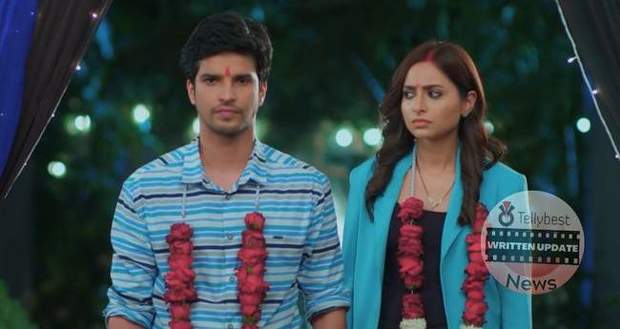 Today's Yeh Rishta Kya Kehlata Hai (YRKKH) 16th November 2022 episode starts with Mahima coming to Manjari and asking Shefali to go to Shivu and she will sit with Manjari.

Later, Mahima manipulates Manjari by telling her that she is responsible for her heartache because she has treated Neil differently.

She also tells her that marrying someone is not a crime and they should not have sent Neil away for this.

On the other hand, Akshara tells Vansh that Aarohi has wronged everyone by betraying their trust while Vansh tells Akshara that Aarohi’s mistake was not so big that Manish told her that she is dead to them.

Meanwhile, Manjari looks shocked and tells Mahima that she has never kept any difference between Neil and Abhimanyu and has sent him away for his own good.

Mahima argues with Manjari asking her what good can there be for him in living alone without the support of his family and sibling especially when Aarohi has assured everyone that she does not want anything from Birla's house or property.

Hearing Mahima calls this behaviour differentiating, Abhimanyu interrupts them and tells Mahima to not question Manjari’s love for Neil which is equivalent to Yashodha’s love for Krishna.

Meanwhile, Akshara tells Vansh that despite their efforts to make Aarohi included in their family she does not accept them as their own and has been doing things to hurt their family.

She tells Vansh that she approves of Manish's decision this time.

However, Mahima tells Manjari to think this matter through if she truly loves Neil as she does not want her to suffer the way she does after losing Anisha.

Later, Abhimanyu and Akshara are sharing their sadness for each other and decide to catch up on some sleep so that things might look better in the morning.

The next morning, Aarohi calls Vansh to help her in getting forgiveness from Manish and becomes worried hearing that Manish is unwell.

In the meantime, Manjari comes down with Shagun Thali and tells Abhimanyu that she is going to bring her son back.

At the Goenka house, Aarohi and Neil come to meet Manish while Akshara tells her that she will always go through her.

Meanwhile, Abhimanyu tries to convince Manjari to not give importance to Mahima’s words because everyone knows about her love for Neil.

He also says that if they do not let Neil learn from his mistake now he will continue to repeat them and gets manipulated by Aarohi for the rest of his life.

Elsewhere, Akshara stops Aarohi from entering Manish's room and tells her that Manish will get more stressed seeing her and that she cannot let happen.

At the Birla house, Manjari tells Abhimanyu that she cannot let Neil away from herself as a mother.

Anand tells her that bringing back Neil is a big decision and she should think carefully.

Harshvardhan also tells her to not hide Neil’s mistake behind her mother’s love and not make Neil the victim of his mistake.

Just then, Abhimanyu stops Harsh from lecturing Manjari and tells Manjari that he will go on her behalf to perform Tilak’s rasam.

Manjari tells Abhimanyu to also think about bringing Neil back.

Later, Aarohi is thinking about Mahima's plan to help her when Abhimanyu arrives with Shagun Thali.

However, Aarohi stops Neil from accepting it.

© Copyright tellybest.com, 2022, 2023. All Rights Reserved. Unauthorized use and/or duplication of any material from tellybest.com without written permission is strictly prohibited.
Cached Saved on: Monday 21st of November 2022 04:53:20 AMCached Disp on: Wednesday 7th of December 2022 12:23:06 PM