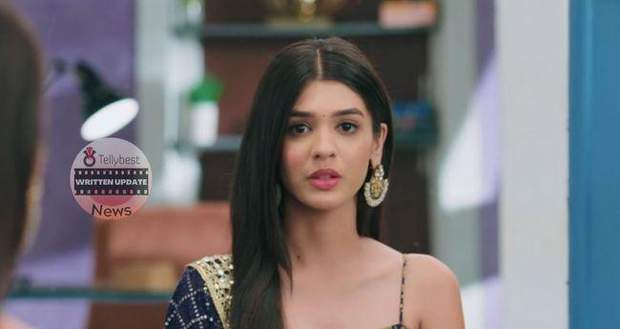 Meanwhile, Majari calls Akshara before she could leave and tells her to stay back and calls Abhimanyu as well.

Later, she reminds them about the Karwachauth that is the next day which will solidify their love with this fast.

Akshara feels overwhelmed and tells Manjari that she cannot keep the fast as she and Abhimanyu are taking a divorce and only pretending because of her health.

Manjari feels stressed and within minutes she collapses in Abhimanyu’s arms.

Just then Akshara comes out of her imagination and feels relieved to see Manjari alright.

Shefali makes them sit together giving them cones to apply mehndi on each other’s hands.

At the Goenka house, Swarna is checking Manish's BP and expresses her concern for his health.

Manish is sad to think of Akshara and Abhimanyu divorcing each other and hopes that Aarohi finds happiness in her relationship.

At night, Akshara and Abhimanyu talk about the uselessness of fasting for each other.

The next morning, Abhimanyu and Akshara come down to eat something but deny eating Sargi.

After a while, Akshara feels sad at pretending to be looking happy for the sake of Manjari and wonders if they are doing the right thing.

At the Goenka house, Manish has prepared Sargi for Swarna while Aarohi thinks of eating the same so that she can fast for Neil.

At the Birla house, Manjari asks Akshara about her holy necklace.

Akshara tells her about the hook problem when Abhimanyu bring it to Akshara.

Abhimanyu and Akshara look bewildered but does as Manjari asks.

After a while, Akshara feels hungry and thinks of eating chips.

Mahima observes Akshara struggling with the packet and decides to expose Akshara’s truth to Manjari.

However, Akshara changes her mind at the last minute disappointing Mahima.

Later, Akshara tells Abhimanyu that she is fasting for Manjari while Abhimanyu tells her not to expect him to fast for her.

In the meantime, Neil talks to Aarohi who complains to him about ignoring her and not taking their relationship seriously.

However, Neil assures her of his love and tells her that he is fasting for her.

Aarohi also tells her that she has kept a fast for him too and will come to his house to break it.

Meanwhile, Mahima meets Manish and Swarna at the market and hints about Akshara lying to them.

Manish becomes suspicious and asks Swarna if Mahima was taunting them.

Later, Akshara observes Neil's worried face and asks him if everything is all right.

Later, Abhimanyu is playing with Shivansh and wants to eat something but Shivansh throws it signalling Abhimanyu to keep the fast.

© Copyright tellybest.com, 2022, 2023. All Rights Reserved. Unauthorized use and/or duplication of any material from tellybest.com without written permission is strictly prohibited.
Cached Saved on: Monday 21st of November 2022 02:42:40 AMCached Disp on: Wednesday 7th of December 2022 02:28:54 PM