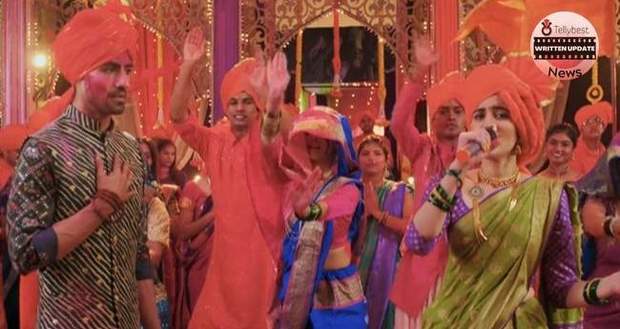 Today's Yeh Rishta Kya Kehlata Hai (YRKKH) 16th September 2022 episode starts with Abhimanyu and Akshara standing up from the pool and are shocked to see each other.

Abhimanyu tells her that he has been waiting for this moment for a year to ask her so many questions but now he wants nothing to do with her.

He tells her not to come back into his life ever again.

Akshara is shocked to hear Abhimanyu’s declaration and follows him calling after him.

Akshara asks Abhimanyu to get as angry as possible but gives her 24 hours more.

Angrily, Abhimanyu takes the drum and plays it while Maaya looks at him with lust-filled eyes and calls him hot in front of Akshara.

Meanwhile, Akshara plans to get everything settled in twenty-four hours.

On the other hand, Vansh comes to give Aarohi her Pendrive and asks her if she is dating someone.

Aarohi tells him that she is dating someone but cannot tell about him for now as things are complicated.

Outside Aarohi’s room, Swarna and Suhasini are pleased to hear Aarohi’s news while Manish becomes worried to hear about the complication.

At the Birla house, Manjari gets worried seeing Abhimanyu behave out of sorts.

Meanwhile, Dr Kunal is scolding Maaya for going out without telling him while Maaya apologises to him and tells him that Akshara is behaving weirdly.

Dr Kunal questions her about the event and is shocked to see Abhimanyu's photo and wonders whether Akshara has told her anything.

In his room, Abhimanyu gets a message from Akshara and blocks her number.

In the meantime, Akshara is waiting for Abhimanyu’s assurance and gets worried when he blocks her.

On the other hand, Maaya is panicking at the thought of Akshara’s leaving after tomorrow's event while Dr Kunal consoles her.

After a while, Manjari comes to Abhimanyu’s room to ask him what is worrying him and if it is related to Akshara.

Abhimanyu turns to Manjari and tells her that she has met Akshara today and has severed all ties with her.

Abhimanyu also tells her that Akshara has asked for 24 hours and expresses his anger for staying away from him for one year and leaving him for her family.

Manjari tells him to give her those twenty-four hours while Abhimanyu looks at her complainingly.

Meanwhile, Akshara perseveres and messages Abhimanyu again and again to get her 24 hours.

Later, Abhimanyu tells Manjari that he cannot give her twenty-four hours now when he has finished everything.

Manjari tells him that he needs to find out her reasons for leaving him without telling him and if she is asking for twenty-four hours then there might be something that they should know about.