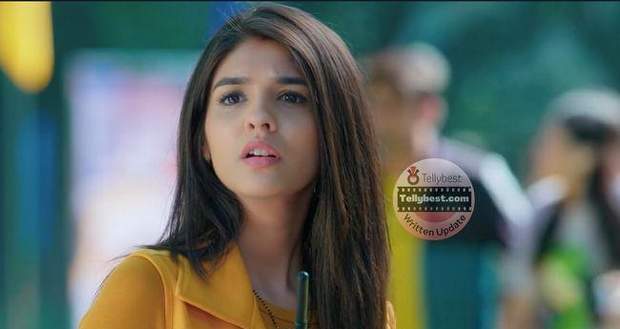 Today's Yeh Rishta Kya Kehlata Hai (YRKKH) 17th December 2022 episode starts with Akshara trying to take out the pointed twig from her leg so that her wound does not get infected.

Akshara calms herself by counting to three and pulls the twig out of her leg with a groan due to the pain.

After covering the wound with her scarf, Akshara stands up and tries to find her way out of the jungle so that she can help that child.

Meanwhile, Abhimanyu searches for Akshara like a madman while calling out her name throughout the forest.

The family members meet at the picnic spot and realize that both Abhimanyu and Akshara are not with them now.

Akshara screams for help but feels weak after some time due to thirst, hunger, and continuously losing of her blood.

Akshara decides to mark her path by leaving behind fragments of her scarf on the branches so that she can differentiate the directions.

Abhimanyu desperately calls Akshara’s name while searching for any signs and spots Akshara’s scarf attached to a tree.

At once, Abhimanyu understands that he is in the correct direction and walks further to find Akshara at the earliest.

Akshara covers herself under a leaf so that she does not get dehydrated from the lack of water.

After walking a distance, Akshara feels weak and stops under a tree for shelter.

Akshara talks to her babies and promises them that she will take care of them as she has promised Abhimanyu to protect herself and their babies.

Akshara spots some berries lying on the ground and thinks about eating them as they will help her to keep herself dehydrated.

However, Akshara stops herself after the thought of those berries being poisonous clouds her mind.

Akshara notices that several fruits have been eaten by birds and squirrels on the ground and concludes that the berries are not harmful.

Even after eating those berries, Akshara feels dizzy and lies on the ground while a heavy log hangs above her.

Abhimanyu continues to follow the path made by Akshara while finding the fragments of the scarf left by her.

While trying to take the scarf, Abhimanyu’s leg gets stuck between stones and he tries to lift the stone to free himself.

Meanwhile, Akshara screams in horror as that log falls on her but she holds it from landing on her.

Abhimanyu hears Akshara’s scream and desperately tries to get his feet out by pushing away the stone.

Akshara shows her strength and determination in protecting her babies and pushes away the log from her with all her might.

Abhimanyu succeeds in freeing her foot and reunites with Akshara with a tight hug.

Telling Akshara how he got scared for those 20 minutes, Abhimanyu asks her to promise him that she will tell him where she is going from now on.

Akshara promises Abhimanyu and they both return to the family members safely.

Later, after returning home, everyone compliments Akshara’s bravery and willpower in protecting herself and her babies.

Manjari tells Abhimanyu that what happened today should not happen again, to which Abhi assures her that he will take care of everything.

The gynaecologist checks on Akshara while Manjari asks Arohi to get checked by the doctor too, making her nervous as she is not pregnant.

© Copyright tellybest.com, 2022, 2023. All Rights Reserved. Unauthorized use and/or duplication of any material from tellybest.com without written permission is strictly prohibited.
Cached Saved on: Wednesday 25th of January 2023 01:00:30 PMCached Disp on: Thursday 9th of February 2023 05:54:44 AM