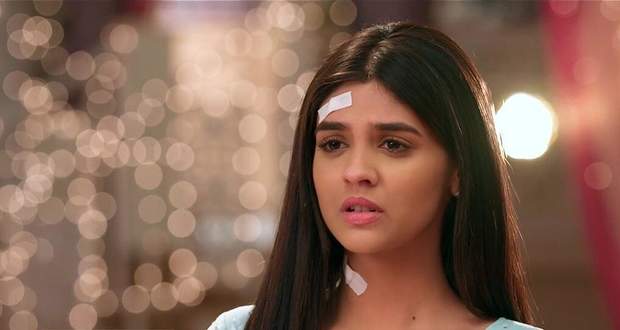 Kairav notices something odd between his sisters and asks Akshara but she dismisses his suspicions.

At the same time, Abhimanyu is in an emotional dilemma after seeing Akshara's bracelet and continues to think about her.

The hospital staff surprise Abhimanyu by dancing and playing instruments to congratulate him on his marriage.

Abhimanyu abruptly bursts out on them but controls himself and continues to dance with them.

Meanwhile, Akshara receives the video from Neil of Abhimanyu dancing and gets emotional.

Arohi arranges for puja and tries to hurry up as she has to go for the exams, Akshara notices that and glares at her.

Arohi lies to the family members that she has to go to the parlor and takes Akshara with her.

On the other hand, Abhimanyu practices his martial arts while remembering Neil's words, he calls for Manjari to return as soon as possible.

Back to the other side, Arohi drives to the airport shocking Akshara who gets speechless on knowing that Arohi will fly away to give the exam.

Akshara tries to stop Arohi at all costs but Arohi leaves determined and asks her to cover this side for her.

Akshara asks Arohi if she loves Abhimanyu but Arohi replies that she wants Abhimanyu as he is the best.

At the same time, Akshara's conscience shudders as she imagines all people asking her to reveal the truth and fight for her love.

Upcoming YRKKH episode updates: Abhimanyu questions Akshara about the camp photo and asks her to meet him at sunset point at 4 pm with an answer.