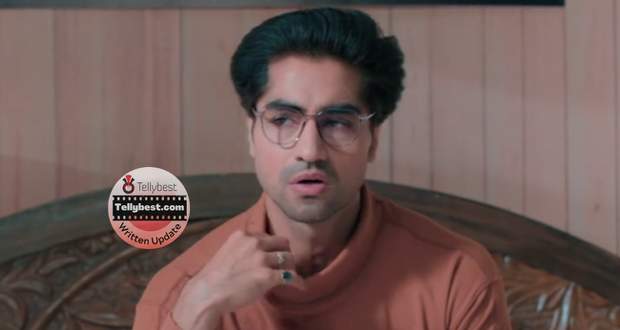 Today's Yeh Rishta Kya Kehlata Hai (YRKKH) 17th January 2023 episode starts with Abhir running excitedly after teaching Abhimanyu a lesson and throws away the Can to get rid of the spray Can which unfortunately lands on a police car breaking its window glass.

Abhimanyu comes to Abheer’s rescue and offers to pay for the damages.

However, Abheer tells him that he hasn’t paid his father and talks about paying the police.

The police officer tells Abheer to be quiet and not talk in between but Abheer talks back at him while Abhimanyu comes between them.

Meanwhile, Akshara is walking with Massoom to the market when Abhinav calls her telling her that his Dilwale Bhaiji is under police arrest and requests her to go and help him as he is with another client.

Akshara tells him that he does not believe in any of his Dilwale Bhaiji and he must have done something to get arrested.

However, Abhinav requests her to go for his sake and help him.

Akshara thinks for a while and tells him that if it is for him then she can talk to Chandan Bhai to help the stranger but she will not go there herself.

Meanwhile, Swarna tells Manish about Manjari’s desire to marry Abhimanyu and Aarohi and she supports her decision too.

However, Kairav comes there and tells Swarna that it is a very bad idea.

He tells her that they cannot repeat their mistake as Abhimanyu is not a good husband nor does he know how to stay in a relationship.

Manish sides with Abhimanyu and tells Kairav that Abhimanyu may not be a good husband but he is a wonderful father whose days start and ends with Ruhi.

Later, Swarna accuses Kairav of being in meaningless relationships and not settling down and calls her a man afraid of taking the plunge and wants the same for Aarohi.

However, Kairav ignores the questions and tells Swarna to not wait for him as he has a date.

Afterwards, Manish tells Swarna that he is not siding with Kairav but what he said just now is also true and Abhimanyu and Aarohi will be a bad choice for each other as Abhimanyu will have no place in Abhimanyu’s heart and her life will be ruined for her.

Akshara at the Police Station

Meanwhile, Abhimanyu is feeling frustrated at being at the police station when Akshara comes there asking for Abhinav Sharma’s passenger.

By the time, Abhimanyu comes out Akshara gets a call from Abheer and missed meeting Abhimanyu.

Later, Abhinav arrives there himself and rescues Abhimanyu after paying the fine of four thousand rupees out of his own pocket.

Abhimanyu thanks Abhinav for helping him out and going out of his way to pay from his savings.

However, Abhinav tells him that he does not feel like a stranger to him but feels a connection with him that he cannot name.

He calls himself Abhimanyu’s friend and that friendships give the right to owe money to each other.

Later, Abhinav tries to cool Akshara who is outrageous to hear about Abhinav's new act of charity and gives him her jewellery and Abheer's fees and other stuff to donate to his Bhaiji.

Abhinav tells her that she is misunderstanding the situation and it was only four thousand rupees that his Bhaiji will return.

However, Akshara tells him that it was not just four thousand rupees but rupees of their savings which are very hard to come by in a middle-class house.

Abhinav tries to appease Akshara by telling her about Abhimanyu’s gesture of giving his watch as collateral.

Hearing that Abhinav has refused the collateral, Akshara refuses to believe that the watch is worth anything.

However, Abhinav defends Abhimanyu while Akshara tells her that he must have done something that the police have arrested him.

Just then Abhir tells Akshara that Abhimanyu was arrested because of him and tells her about his visit to Abhimanyu.

Akshara and Abhinav are horrified to hear that while Akshara tells him that he is getting out of hand and will have to be punished.

Abhinav agrees with Akshara and tells her that she will also get a punishment for continuously distrusting his Bhaiji who is a gem of a person.

He tells them that he is going to invite Abhimanyu to their house and they can see for themselves how wonderful and good a person he is.

However, Akshara refuses to have him at home and Abhir sides with Akshara.

Seeing their stubbornness, Abhinav also gets stubborn and tells them that he will definitely make the three of them meet each other.

© Copyright tellybest.com, 2022, 2023. All Rights Reserved. Unauthorized use and/or duplication of any material from tellybest.com without written permission is strictly prohibited.
Cached Saved on: Wednesday 25th of January 2023 09:48:44 AMCached Disp on: Monday 6th of February 2023 05:57:51 AM