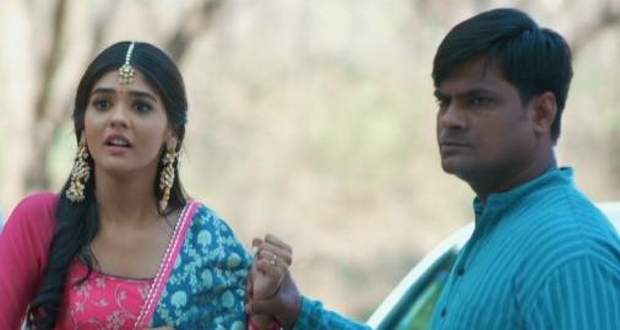 Today's Yeh Rishta Kya Kehlata Hai (YRKKH) 17th March 2022 episode starts with the Goenkas and Birlas proceeding further for the Ganesh puja after the arrival of the lovebirds Akshara and Abhimanyu.

The priest starts chanting the mantras, commencing the puja.

Abhimanyu and Akshara are delighted to see everything going smoothly as they are inching closer to their wedding day.

However, their happy mood turns into a bitter one, when the cloth is lifted off the plate to present the wedding card to Lord Ganesha.

Seeing Arohi’s name written on the card instead of Akshara’s name, makes Abhimanyu shout at Arohi in fury.

Despite Arohi repeatedly saying that she hasn’t done anything wrong, Abhimanyu doesn’t believe her while Akshara favors Arohi.

Crying hysterically, Arohi apologizes to Abhi and others for the mistakes she unknowingly made and leaves the temple thereafter.

Arohi shares her pain with Kairav that how she feels nobody loves her in the family anymore.

Kairav consoles her with his affectionate and soothing words.

Meanwhile, Akshara and Abhimanyu argue over Akshara defending Arohi every time, letting go of the mistakes she makes.

Abhimanyu confesses to Akshara that he is afraid of losing her and knows Arohi will never accept their relationship.

Akshara tries to make Abhimanyu understand that his fear is irrational, however, Abhimanyu doesn’t agree with her and says that one-day Arohi will be the biggest problem in their lives.

On the other hand, Anisha informs Kairav that she has to go back to Mumbai for an important project.

Even though Kairav doesn’t really feel happy about the sudden departure, still he supports Anisha in her decision.