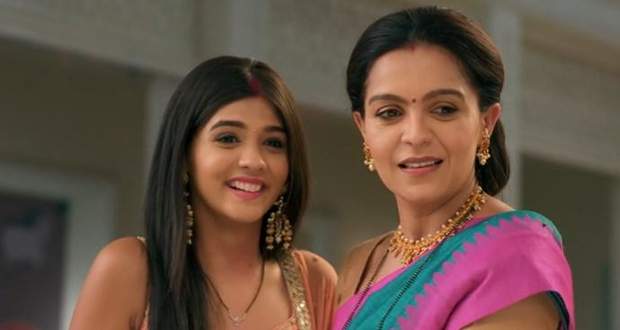 Just then Akshara brings drinks and Manjari very proudly tells them that it is prepared by her daughter in law.

Later, Anand, Mahima and Harshwardhan excuse themselves to go for the meeting while Manish and the other Goenkas feel bad.

Abhimanyu distracts them from talking about Akshara’s music department and discussing its future success.

Afterwards, Neil gives a twist to the games and gives them chopsticks to take out the ring from the bowl.

After too much struggle, Abhimanyu wins the game but Abhimanyu tells them that Akshara has allowed him to win.

Abhimanyu later tells Akshara to never allow him to win because there is no competition between them and never let your rights go in the name of love because people who truly love accept each other as they are.

Meanwhile busy Birla’s decided to open an IVF department in their hospital and shuts down the music therapy department mocking its usefulness.

Akshara who has come with refreshments overhears them and feels hurt and disappointed.

Kairav observes Akshara’s worrying face and questions her about it but Akshara lies to him.

Abhimanyu comes looking for her and assures Kairav that Akshara’s happiness is his responsibility.

Meanwhile, Harshwardhan finalises the detail and comes down to see off the Goenkas.

Goenkas are excited for Akshara to work in her own department.

Abhimanyu tells Manjari that he is taking Akshara to the hospital where people are waiting for him for a small get together.

Akshara wonders about the silence that the busy Birlas are keeping about shutting down the music department.