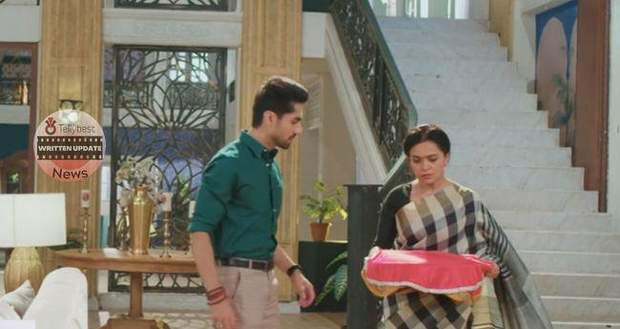 However, Akshara apologises to Manjari and asks her to not force her to do something in which her heart is not involved.

Enjoying the drama, Mahima offers to perform the Aarti while Manjari tells Aarohi to come inside as a daughter-in-law of the house.

Aarohi is happy to get back at Akshara and smiles brightly at her while Akshara walks away from there followed by Abhimanyu.

Meanwhile, Swarna unintentionally calls Aarohi in front of Manish and later apologises to him.

Just then Kairav comes to help Swarna with medicines while Swarna tells him to take up more responsibility for the house as she is getting old.

Manish also tells Kairav that he has to take care of business as well as his heart is weakening.

Meanwhile, Abhimanyu explains to Akshara his reasons for bringing Aarohi and Neil at home.

He tells her that Aarohi is planting seeds of insecurity in Neil and manipulating him into believing that Neil is not one of them.

He tells Akshara to keep the enemies close so they can keep an eye on them.

Akshara tells her that this was Aarohi’s plan all along and they will have to make Neil understand that Aarohi is only after his connection with his family.

Later, Abhimanyu and Akshara feel sad for having a difference of opinion and resolve to never let it affect their relationship.

Meanwhile, Aarohi brings tea for Mahima as a thank-you for bringing her back into the house.

Later, Aarohi tells Akshara that she cannot ignore her forever while living under one roof.

Meanwhile, Akshara warns Aarohi that she will not be tolerating any of her tantrums as the elder Bahu of the family.

In the meantime, Kairav is wondering about Manish’s comments about Kairav taking over the business.

Just then, Suhasini comes to council Kairav and encourages him to face the challenges in business and become Vansh’s partner like Akhilesh was for Manish.

Akshara replies to Abhimanyu’s questions using Nellie too and between their bantering the light goes off.

Later, Akshara realises that something is glowing in the room and looks surprised to see Love written in it.

© Copyright tellybest.com, 2022, 2023. All Rights Reserved. Unauthorized use and/or duplication of any material from tellybest.com without written permission is strictly prohibited.
Cached Saved on: Monday 21st of November 2022 01:09:29 AMCached Disp on: Saturday 10th of December 2022 03:12:59 PM