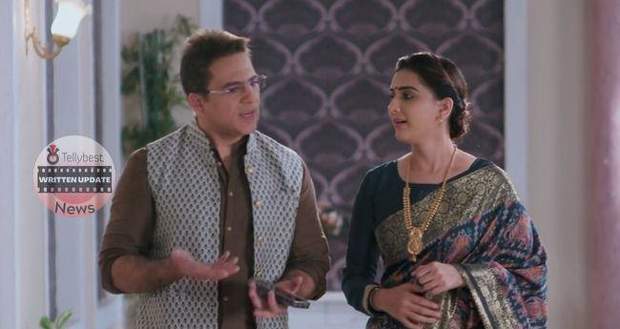 Today's Yeh Rishta Kya Kehlata Hai (YRKKH) 17th October 2022 episode starts with Abhimanyu writing a mail and getting disturbed by the noise coming out of the bathroom.

Hearing the door open, Abhimanyu shuts his eyes in an effort to not look at Akshara.

Later, feeling helpless he switches on the laptop camera to watch Akshara get ready and admires her beauty.

Meanwhile, Akshara also looks admiringly at Abhimanyu and feeling conscious of the eye contact turns away ready to leave.

However, Abhimanyu stops her and reminds her of the vermillion.

Seeing the vermillion, Akshara remembers several moments in the past and with wet eyes puts on a vermillion.

On the other hand, Manish is anxiously calling Akshara's number while Swarna tells him to not give importance to Mahima’s comments and have faith in Akshara.

Momentarily, Manish agrees but tells Swarna that after breaking her fast, he is going to Jaipur to meet Akshara as he is unable to reach her.

At the Birla house, Shefali requests the neighbours to not say anything to Manjari about Abhimanyu and Akshara’s divorce.

Just then, Aarohi looks inside the window searching for Neil while Akshara and Abhimanyu come down.

Just then the lights goes out and Aarohi could not see Akshara in the house.

Seeing Aarohi, Neil drags her away so that no one sees them.

Meanwhile, Abhimanyu and Akshara go to check on the fuse.

Later, Akshara and Abhimanyu overhears Neil breaking his fast and goes to inspect them.

However, Neil has already taken Aarohi away but Aarohi’s mother’s bangle falls on the ground.

After a while, Akshara sees Aarohi leaving in the car and gets shocked.

Abhimanyu is shocked to hear about Aarohi and understands Neil's hesitation in telling him about Aarohi.

He gets worried knowing Neil and Aarohi’s involvement with each other and wonders if this relationship is a good idea especially when they haven’t been able to sort out issues concerning them and Anisha and Kairav.

Just then Abhimanyu realises another damning fact that Aarohi must have seen Akshara too as Akshara has seen her and she will definitely make a spectacle.

Meanwhile, Aarohi is shocked to see Akshara celebrating Karwachauth at the Birla house after lying to her family.

In the meantime, Akshara panics at the thought of Manish finding out about her being at the Birla house and how betrayed he will feel.

Seeing Akshara on the verge of a panic attack, Abhimanyu catches Akshara in his arms and asks her to sing.

Meanwhile, Akshara recalls Abhimanyu’s hatred for her singing and refuses to sing but Abhimanyu requests her ardently.

Akshara begins to hum to control her panic while looking into Abhimanyu's eyes.

Soon they came very close and feels the comfort of each other's presence.

However, the closeness does not last for long as Shefali’s voice brings them back to the present and they get separated feeling awkward.