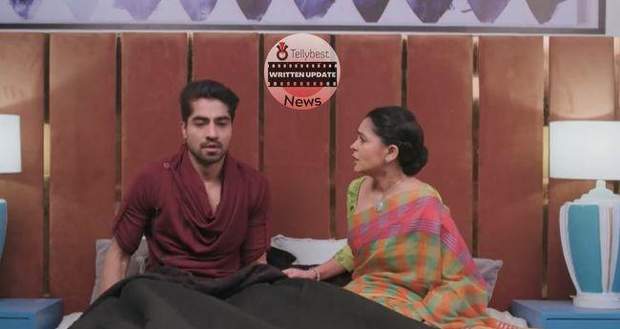 She also tells him that it will give him peace of mind knowing that he has been given a chance to explain Akshara's betrayal.

After a while, Akshara gets a message from Abhimanyu saying he is giving her 24 hours.

Just then Akshara gets a call from the investigator and she comes out to listen to the call.

As she was going back she overhears doctor Kunal promising Maaya that he will not let Akshara leave after tomorrow's gala.

Akshara is shocked to hear Doctor Kunal’s nefarious plan and gets angry at him for thinking to keep her with Maaya for the rest of his life.

In the meantime, Dr Kunal comes to remind Akshara of the importance of the event while Akshara asks him to bring Kairav to her as he is her strength.

Dr Kunal agrees and goes to get Kairav.

Akshara is making plans to get Kairav out of Dr Kunal’s custody and asks Kairav to give her clues about his hotel.

Meanwhile, Abhimanyu is meditating and prays to let the truth come out within twenty-four hours.

Later, Manjari comes to Mahima to console her for remembering Anishha on her birthday.

On the other hand, Akshara finds out about Kairav’s hotel and decides to go.

After a while, Maaya comes to Akshara to give her the holy thread for good luck.

Meanwhile, Abhimanyu is singing a birthday song for Anisha and asks everyone to be happy remembering Anisha.

However, Mahima questions Abhimanyu for not asking Akshara where she is hiding Kairav.

Abhimanyu and Manjari are surprised to hear Mahima while Mahima tells them that she has overheard them.

Meanwhile, Akshara arrives at Kairav’s hotel to rescue him.

Mahima shames Abhimanyu for letting the matter of Anisha’s murder slide from their minds.

Abhimanyu gets angry and tells Mahima that he has not forgotten anything and that just because he does not say what she wants to hear does not mean that he does not care.

He also tells them that he has given 24 hours to Akshara to explain herself and after that, all truth will come out.

Mahima berates him for believing in Akshara after what she has done but Abhimanyu tells her that he does not want to live in regret that he did not give Akshara a chance.

Later, Mahima asks Abhimanyu to promise to support her in her decision to avenge Anisha’s death after Akshara’s twenty-four hours are over.