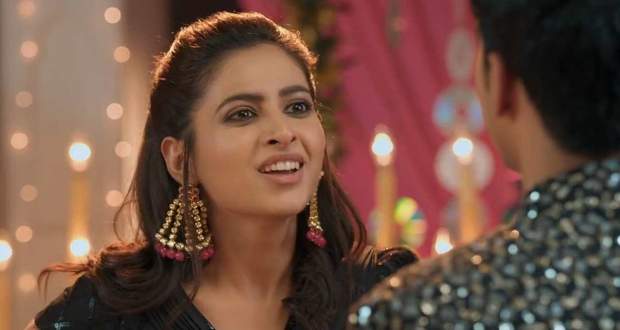 Just then, Akshara remembers asking something to Kumar Shanu and rushes to him.

Abhimanyu tries to save the letter which gets soaked with Akshara’s bottle but Neil distracts him making him leave the letter there.

Meanwhile, Kumar Shanu agrees to sing one more song before leaving and all the family dances while he sings.

Later, Abhimanyu is seeing off Kumar Shanu when the investigator approaches him and shows him the video of the car.

He also tells Abhimanyu that the car belongs to Aarohi Goenka which shocks Abhimanyu into silence.

Abhimanyu comes to know about the two girls in the car and looks at Akshara while remembering the accident that she had been into.

Abhimanyu is not ready to believe that Akshara could be the culprit and leaves his house.

Unable to find Abhimanyu anywhere, Akshara worries for him.

Abhimanyu is running madly on a deserted road while thinking about Akshara being involved in the accident.

In the meantime, Neil tries to assure Akshara that Abhimanyu will come back soon but Akshara’s heart tells another story.

Abhimanyu is still struggling to accept Akshara’s truth and falls on the road while running.

At the Birla house, everyone is wondering about Abhimayu’s absence while Parth tells everyone that he might have gone to the neighbour's house to check on him.

Parth’s talk relaxes Akshara and they all leave to go back to the house.

At the house, Akshara is feeling excited about getting married and tells her tired family to get up and make preparations for the next event.

Her family groans with pain telling her to let them rest today and they will plan tomorrow.

Abhimanyu gains consciousness but his thoughts are still troubling him and he begins to do ‘Tandav’ to channel his anger, however his ‘Tandav’ was just in his mind.

The next morning Akshara places Abhimayu’s cutout in the lounge and dances around it with her family, while Abhimanyu is still out and thinking of Akshara’s panic attack.

Abhimanyu texts Akshara and asks her to come to him.

Arriving at the location of the accident gives goosebumps to Akshara while Abhimanyu is standing silently.