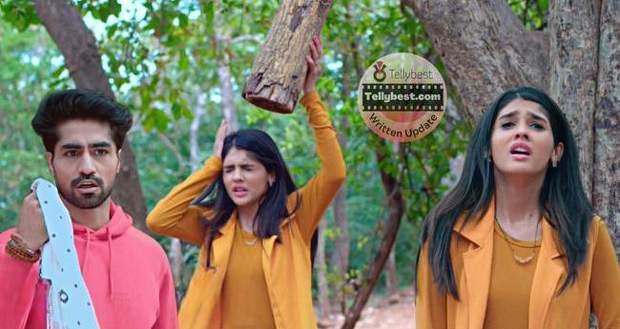 Akshara stops the doctor and cutely reasons that Abhimanyu will ask her a thousand questions with medical terms so it's better to call him here.

Abhimanyu asks the doctor so many questions at a fast pace that even the doctor advises him to calm down.

After Akshara, Manjari tells Arohi to get a check-up but Arohi pretends to feel nauseated and enters the bathroom.

Arohi locks the door and makes fake vomit sounds while Akshara remembers Shefali's suspicion of Arohi lying about something.

Abhimanyu goes to call Neil while Manjari knocks on the bathroom door while urging Arohi to get a check-up.

Worried, Neil walks in and knocks on the bathroom door worried.

The doctor walks away as she has to do a C-section and Neil suggests to everyone that he will get Arohi checked by her gyno friend.

At night, Abhimanyu massages Akshu's feet and she compliments him for having magical hands.

Akshara cutely says that she is habitual of his massages now and she will ask for them every day.

Abhimanyu assures her that his foot massage service is available for her anytime.

Later, Akshara states she is feeling hot even in the cold breeze.

He taunts her for feeling hot in the cold breeze when she doesn't even let him turn on the AC in hot weather.

Akshara tells him a scenario about going to the hills and experiencing snowfall with a steaming hot cup of tea.

Suddenly fake snow starts to fall on Akshara and she stands shocked and sees Abhimanyu sitting on top of a ladder with a remote.

Akshara opens her arms and enjoys the fake snow and pretends to make a snowball and throws it at Abhimanyu.

He acts to get hit by the snowfall and she laughs at his antics.

Later, Abhimanyu sits on a chair with a blanket and Akshara in between his legs and he wraps the blanket around her feeling the warmth of his body.

The next morning, in Arohi’s room, Neil asks the doctor if Arohi and the baby are okay and the doctor lies saying everything is alright.

Neil sits near Arohi and states the happiness that the baby has brought him and the family.

In Abhimanyu’s room, Akshara pretends to have a mood swing when Abhimanyu does not tell her about the bank paper he is filling.

Akshara laughs when he gets scared and sits on his lap and he tells her that he is securing his future babies by investing.

She wraps her arms around his neck and tells him that she is writing a lullaby for their babies.

Later, Manjari hears Akshara talking to his producer about organizing a concert away from her house.

After the call, Manjari advises Akshu not to go to the concert as her health is fragile.

Afterwards, Arohi meets Akshara and states she is going to meet the doctor for her check-up.

In Neil’s cabin, Neil tells Abhimanyu about not getting his father’s love and now he feels like he is breathing for his child only.

In the parking lot, Akshara stops the car and Manjari goes to the market while Arohi parks her car beside hers.

Later, Akshara sees Arohi going into the IVF hospital and gets worried for her.

Meanwhile, Neil and Abhimanyu talk about becoming papas and Abhi assures Neil that he will become the best bade papa of his children.

Neil jumps on Abhimanyu’s back in happiness and both brothers laugh.

In the hospital, Arohi refuses to betray Neil by doing an IVF treatment without Neil as she had already lied about her pregnancy.