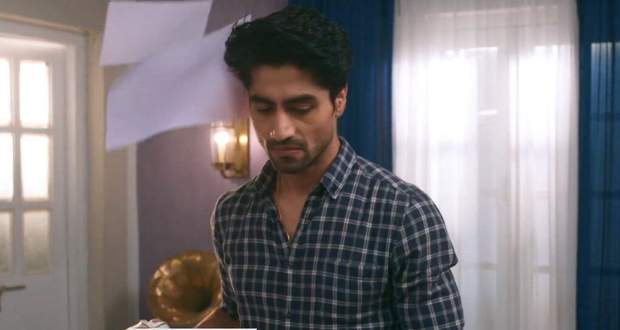 Akshara comforts him, draws hearts with him, and cuddles with him as Abhimanyu grows more nervous with each passing second.

Meanwhile, Neil gets worried about not being able to do anything for Abhimanyu and his unfair marriage with Arohi.

At the same time, Kairav calls Akshara making her panic as Arohi still hasn't returned after giving her exam.

Kairav video calls Akshara to ask about the decorations but gets surprised to see Akshara in the car, Akshara lies and covers the situation somehow.

Akshara gets anxious about the family members and Abhimanyu finding out about Arohi leaving like this and gets confused about whether she should blow up Arohi's cover or not.

Arohi picks up Akshara's call and tells her to relax as she is on her way to return, Akshara gets worried of being caught.

Back at Goenka's residence, all family members get engaged in the preparations of the marriage, Badi maa calls Akshara to know about their status of returning making Akshara lie again to cover up.

On the other side, Neil listens to Shefali talking to Parth about seeing Arohi at the airport leaving for somewhere. He decides to confront Abhimanyu about the matter.

Neil throws away Abhimanyu's groom attire and demands him to cancel the marriage, Abhimanyu tells him to stop but Neil remains adamant.

Amid Neil and Abhimanyu pushing and pulling each other, the camp photo gets revealed, Abhimanyu sees it with glaring eyes.

Upcoming YRKKH episode updates: Abhimanyu runs to Goenka's house to meet Akshara and asks her to see him at the sunset point at 4 pm leaving her shocked.