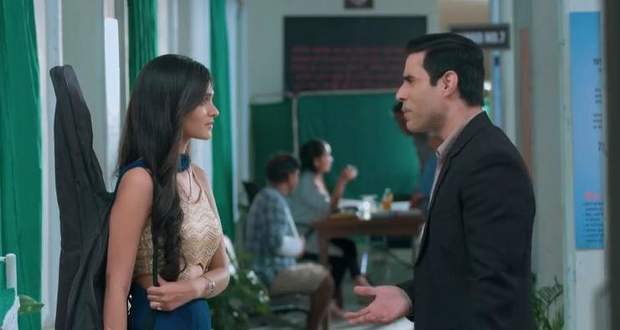 Today's Yeh Rishta Kya Kehlata Hai (YRKKH) 18th July 2022 episode starts with Abhimanyu trying to get his bearings about his condition and wondering about Akshara getting late.

Just then Akshara messages Abhimanyu telling him about a prior appointment.

On the other hand, Aarohi is once again rejected for marriage due to her licence suspension.

Aarohi hears this information and thinks of Abhimanyu who will rejoice in the knowledge that her marriage got cancelled the second time.

Abhimanyu finds Akshara looking worried and hugs her saying if anything is bothering her that she should share this with her partner.

Akshara feels excited and nervous while telling Abhimanyu about participating in India’s Magical Voice and asks Abhimanyu whether she should do that or not.

Abhimanyu decides to keep the news of his MRI to himself and tells Akshara that he is very happy that Akshara is finally thinking of winning for the first time and about herself.

Afterwards, Abhimanyu sets the mood in the room and asks her to sing for him.

He also creates a picture for Akshara where she will soon sing on the real platform and the world will cheer for her.

Akshara sings for Abhimanyu while Abhimanyu thinks that it's a good thing that Akshara told her first otherwise his confession will stop Akshara from realising her dream.

After a while, Abhimanyu informs the Goenkas about Akshara's competition.

Kairav gets happy that Akshara is thinking about herself but Aarohi becomes angry as she overhears them.

Meanwhile, Abhimanyu is happy that Akshara is doing something with her career when Akshara hugs him while Abhimanyu tells her that her intentions look naughty.

Akshara further gets close to Abhimanyu and asks him how is he feeling.

Abhimanyu tells Akshara that he is feeling very distracted and talks suggestively.

Akshara feels shy thinking Abhimanyu is suggesting a romantic interlude while Abhimanyu teases her and tells her that he is talking about rehearsal.

Akshara feels disappointed and goes down where everyone surprises her with a party.

Everyone encourages and motivates Akshara to give her best and enjoy the journey of her competition.

Neil plays the recording of various patients of Akshara who says wonderful things about Akshara.

Abhimanyu tells Akshara that when she will perform on stage then all these talks should remind her that other people have confidence in her.

After a while, they all begin to dance and enjoy the party.

On the other hand, Aarohi looks at Akshara’s party video and gets angry at Akshara for celebrating after ruining her career.

Abhimanyu looks at his watch and takes his medicine while Akshara looks at him curiously.