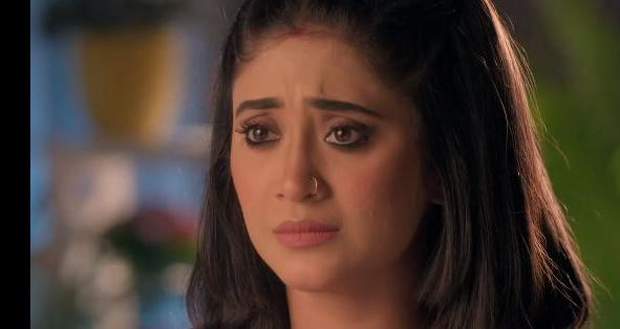 Elsewhere, Maudi meets Sirat and talks to her while say says that she noticed her avoiding Kartik.

Maudi confronts her and asks if Kartik is the reason while Chauhan eavesdrop on their conversation.

However, Sirat refuses her every word and tells her that she is speaking nonsense.

Maudi tells her that she got too late in recognizing love and married Ranvir.

Sirat makes Maudi leave and goes to her room while Chauhan plans to expose her to Ranvir.

The next morning, Sirat sends a photo of the newspaper in which she got the front page to Kartik and gets happy while remembering Maudi's words.

Later, she surprises Ranvir with many gifts and he says 'I love you' to her but she fails to say it back to him.

Chauhan invites the Goenka family to dinner while hiding it from Ranvir and Sirat.

© Copyright tellybest.com, 2020, 2021. All Rights Reserved. Unauthorized use and/or duplication of any material from tellybest.com without written permission is strictly prohibited.
Cached Saved on: Saturday 31st of July 2021 10:44:58 PMCached Disp on: Sunday 1st of August 2021 06:27:03 AM