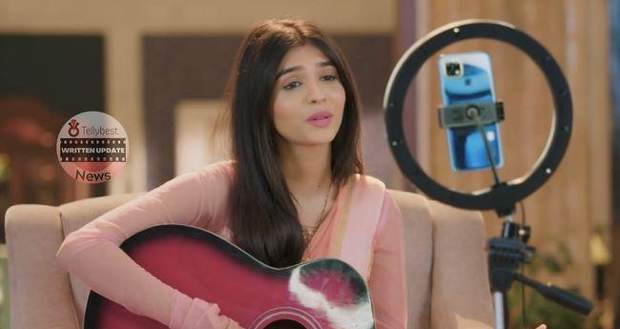 Feeling Abhi’s bare chest and breath on her neck, Akshu gets shy and walks ahead.

She gives a cute look to Abhi so he understands that she is shy.

Abhi walks to Akshu and slides his hands on Akshu’s waist and slides her hair back while kissing her earlobe with his teeth.

Akshara's heart feels a rush when Abhimanyu picks her up in bridal style and walks to the bed while looking into her eyes.

In Arohi’s room, Neil tries to romance Arohi and talks seductively with her.

However, Arohi pushes back Neil and tells her she feels hot and sweaty, not romantic.

Arohi complains about mosquitos, turns Neil off and goes to sleep angrily.

In the morning, Akshu is sleeping in Abhi’s arms and she slides down to his waist.

Abhi pulls Akshu back into his arms and tightens his hold on her.

He teases Akshara saying he saw a dream in which she was fat like a golgappa and talked with his father.

Hearing Abhi’s words, Akshu gets shy and releases herself from his arms and starts to tie her bun.

Abhimanyu says every girl looks beautiful when they tie their hair in a bun and Akshu gives him a side look saying every girl.

Afterwards, Abhi holds Akshu by her waist and discusses their future children.

Abhi says he wants 3 children while Akshara says she wants 3 at least.

At the same time, Akshara gets a message about a Singing contest and goes to get ready hurriedly.

Later, in the living room, Arohi makes Halwa for everyone for her first Rasoi.

Meanwhile, Manjari asks Akshara where she is going and Akshu informs her about the singing competition.

Mahima offers for Arohi to join the hospital but she refuses as Akshara will go out so she will take care of the house like Manjari.

Akshara retorts to Arohi’s taunt saying that she will make a balance between her professional and personal life.

She walks out angrily while Abhi calls her and says best of luck and offers to drop her off.

However, Akshara refuses and urges him to go to the office.

Afterwards, Abhimanyu gets a call from Dr Rohan who calls him to come urgently and informs Abhimanyu that Akshu got into an accident.

Meanwhile, Akshara lies on the hospital bed awake and he walks to her emotionally.

Abhi sits on the ground and holds Akshara’s hand and asks about her health.

Akshu assures Abhi that she is completely okay and hides her pain from Abhimanyu.

Meanwhile, Dr Rohan shows Akshu’s Reports to Abhi so he goes to consult the doctor once.

In the Birla house, Arohi video calls Vansh and when she sees Manjari she changes the topic to Pagphera.

Arohi acts like an orphan child because Manjari has broken all ties with her.

In the hospital, Abhi meets the doctor who tells him that Akshu has suffered internal injuries and she will suffer problems in conceiving a child.